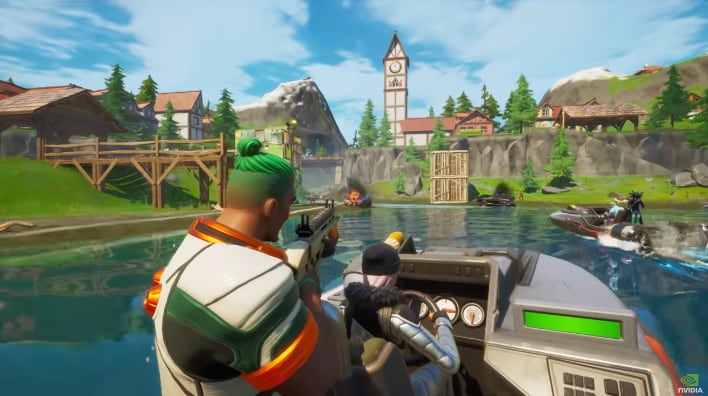 Are you a Fortnite fan, but are sick and tired of hearing about Epic Games' battle with Apple? Well, we've got some news that might be right your alley in the wake of NVIDIA's big GeForce RTX 30 Series (Ampere) announcement.

NVIDIA and Epic announced today that Fortnite will be adding support for three technologies: NVIDIA Reflex, DLSS, and real-time ray tracing. As we discussed in our broad Ampere overview earlier today, NVIDIA Reflex makes better use of available CPU and GPU resources to reduce latency (i.e. input lag) by as much as 50 percent.

DLSS and real-time ray tracing are already known quantities for those familiar with Turing-based GeForce RTX cards. DLSS makes use of the RTX Tensor Cores along with a deep learning neural network to improve game performance while maintaining crisp visuals. As for ray tracing, the cartoonish looks of Fortnite are about to get a little bit more lifelike thanks to the added fidelity that comes with this support.

According to NVIDIA, these are the ray tracing enhancements that you can expect in a forthcoming Fortnite update:

In the end, these additions will help to make Fortnite -- a game that has a global audience of 350 million -- an even more compelling destination for gamers.

“The GeForce RTX 30 Series is a testament to NVIDIA’s dedication to ray tracing and artificial intelligence,” said Marcus Wassmer, engineering director for Graphics at Epic Games. “Second-generation ray tracing, innovative use of AI with DLSS, and a large raw performance boost make the GeForce RTX 30 Series a truly impressive powerhouse for graphics technology in gaming.”