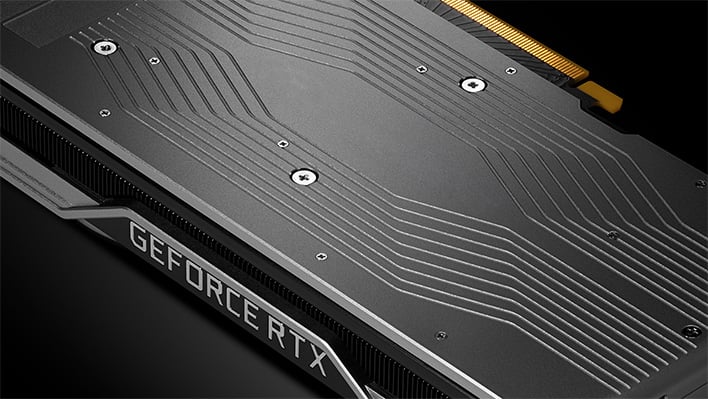 It seems we can hardly take a breath without another leak about NVIDIA's GeForce RTX based on the company's next-generation Ampere technology. Yesterday, the top-end GeForce RTX 3090 Ti was posing for the cameras. Today, one of the smaller siblings, expected to be called GeForce RTX 3080, went for a romp on Userbenchmark.

As pointed out by _rogame on Twitter, a device with an unknown NVIDIA PCI identifier showed up in the online database with a single data point. PCI IDs are easy to parse: the first four hexadecimal characters indicate the manufacturer and the rest identify the component. This is used by drivers to match up hardware with its necessary driver software. The vendor ID 10DE belongs to NVIDIA, and so far the device ID of 2206 hasn't been assigned yet, indicating it's still on the way.

According to _rogame, this card is indeed the GeForce RTX 3080. There are no other Userbenchmark entries for this device, so it does appear to be an upcoming card rather than something current. Apparently this card has a maximum GPU clock of 2,100 MHz and 10 GB of 19 GT/s GDDR6X memory (2,375 MHz, or 4,750 MHz effective). Since most 8 GB cards these days have a 256-bit memory bus, that might indicate that this card has a slightly wider 320-bit bus, which would work out to 760 GB per second of bandwidth, which blows away the GeForce RTX 2080 Ti's 616 GB/s thanks to the much higher speed of GDDR6X. 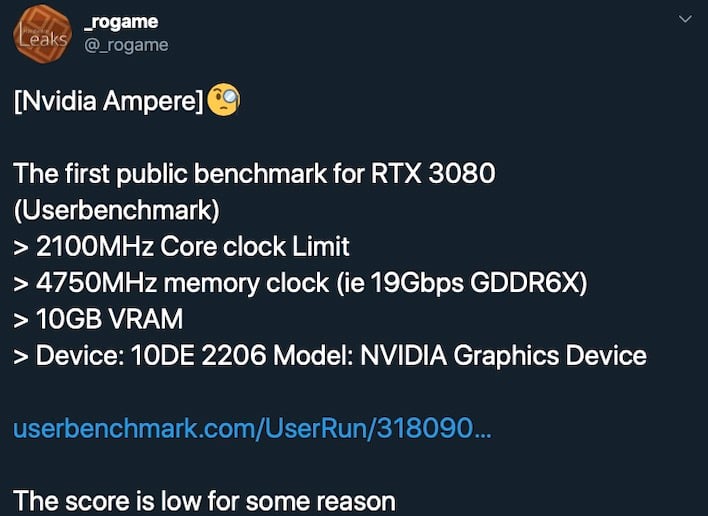 The card was installed in a PC with an unusual configuration including a Xeon Gold 6154, an 18-core processor which means it might not tell us much about performance. That CPU might not be optimal for gaming, but it should still be fast enough to push the card relatively hard. That means we hope this entry doesn't tell us much about performance, because the card scored pretty poorly on those two APIs. DX9 titles relied largely on fixed-function logic in NVIDIA's ancient GeForce 7000 series or AMD Radeon 1900 series last seen in 2006, whereas today's games and 3D apps use much more GPU compute power. As a result, these tests aren't terribly relevant other than to let us know, once again, that Ampere cards are coming.

We're still counting down the days to NVIDIA's next big announcement, which is now roughly two weeks away. Given how the official GeForce Twitter account is counting down big graphics card and game releases in the company's past, we have to figure that whatever the green team has up its sleeve, it's related to 3D games. Presumably all of our questions will be answered once the countdown hits zero. Stay tuned!