They might be confusing to the uninitiated, but graphics card model names generally make sense. Sure, you have your trouble spots, like NVIDIA's lower-end GPUs (particularly from earlier series, like the four different models of GT 640.) But still, if you understand the labeling, you generally know what you're getting.


Most GPU model names are decided based on the specs of the GPU core and its memory bus. Specifically, the graphics processor's core configuration—its distribution of shaders, texture units, output units, and similar resources—and expected performance level are the primary deciding factors in whether a card is branded a "RTX 3080" or "RTX 3070". The arrangement of these resources is one of the biggest factors in determining graphics performance, but it's not the only one. 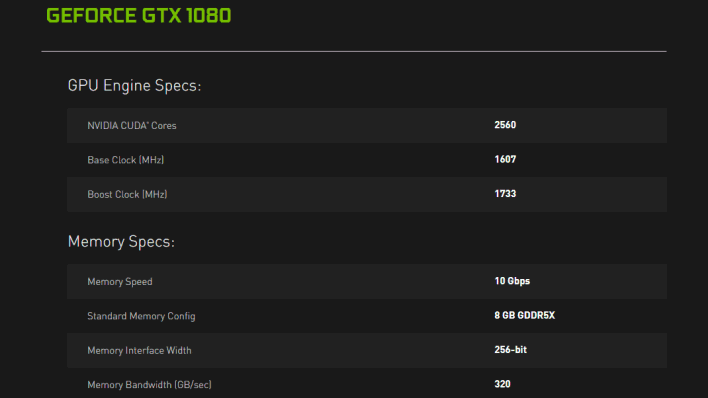 Traditionally speaking, when we talk about a certain model of graphics processor, such as the above "GeForce GTX 1080", that specifies a lot of qualities besides the aforementioned physical characteristics of GPU configuration and memory bus. Attributes like clock rates and power limits are also generally decided by the model name, and while third-party add-in board (AIB) vendors often fiddle with these numbers, NVIDIA and AMD set fairly strict limits on the degree to which they are allowed to do so.

This is much less the case in the mobile arena, especially for NVIDIA's last few generations of GPUs. You see, modern graphics chips are able to scale downward quite well in terms of clock rate and thus power consumption. You can set a 50% power limit, for example, and the GPU will operate just fine—albeit at significantly reduced performance—at the lower power draw.


As a result, we have seen situations many times before where an ostensibly more-powerful GPU actually performs worse than a supposedly-slower chip because of the power limits in place on the faster GPU. This latest example from Notebookcheck is just another such case.

The story is that Notebookcheck tested two MSI laptops, the Stealth GS66 and Vector GP66, both with GeForce RTX 3070 Ti GPUs. The site found that due to the much-lower 105 W TGP ceiling on the slimline Stealth laptop, its GeForce GPU was between 15 and 17% slower than the Vector's 150-W version of the same graphics chip. Frankly, that's a smaller gap than you'd expect considering it drops its power budget by 30%.


Still, that deficit is enough to actually make the Stealth GS66's RTX 3070 Ti slower than some laptops equipped with the "non-Ti" version of the RTX 3070. Indeed, the Alienware m15 R4 that we reviewed over a year ago scores higher in several tests than the Stealth GS66 despite being equipped with the original GeForce RTX 3070.
Is this a surprise? Not at all. The RTX 3070 and its "Ti" sibling are based on the very same chip, so it really is an apples to apples comparison: the 140W GPU is faster than the 105W GPU. After all, the number of cores your chip contains is only a single piece of a multi-part puzzle, and the relative effects of core count and clock rate balance out much more easily when we're talking about six-thousand cores instead of just six.

It can be a frustrating situation for the consumer, but in all fairness, MSI very clearly lists the total graphics power and dynamic boost capabilities of the GPUs on these laptops' product pages. We also have to credit NVIDIA for listing the GPU TGP in its Control Panel application.

We haven't observed an attempt by laptop vendors to obscure this information, so if consumers are fooled, it's not due to lack of information. Just remain advised that you can't take a laptop's GPU model name as a sure-fire guarantee of a given performance level.