Earlier today, we brought you some early photographs of one of Gigabyte's incoming entry-level Ampere graphics cards: the GeForce RTX 3060 Ti GAMING OC. Given that cards based around this GPU are supposedly launching this week, it shouldn't come as a surprise that additional benchmarks are starting to leak out to give us a better idea of how it will perform.

This is just one performance metric, but these figures line up with what we'd expect from something that is pulling in near the bottom rung of the Ampere ladder. The numbers are also quite impressive considering that NVIDIA is reported to launch the GeForce RTX 3060 Ti Founders Edition at $399, which is $100 cheaper than the GeForce RTX 3070. 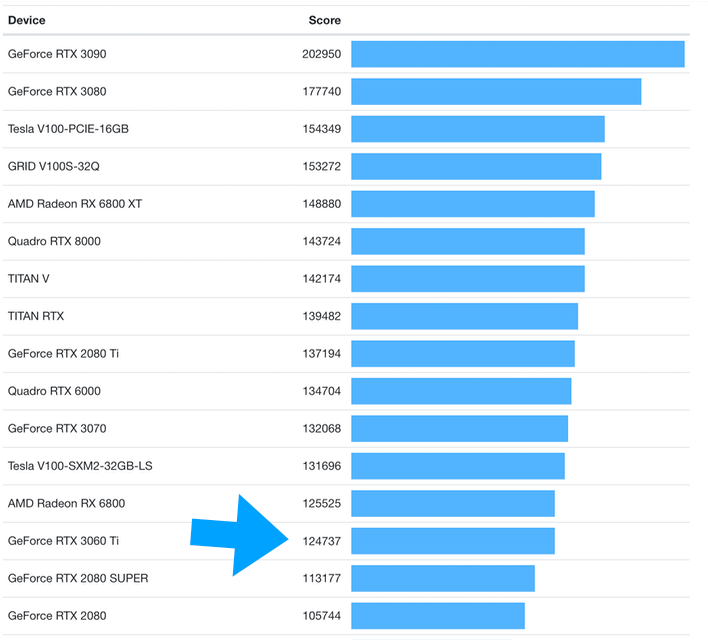 However, we'd imagine that the GeForce RTX 3060 Ti Founders Edition will be hard to come by -- Best Buy is the only official retailer lined up to sell NVIDIA's Founders Edition cards -- and availability likely won't be much better for the company's AIB partners.

NVIDIA has previously indicated that Ampere supplies will be limited until at least Q1 2021, and the GeForce RTX 3060 Ti probably won't be spared from this unfortunate situation. Gamers have been clamoring for all three previously released Ampere cards -- GeForce RTX 3090, RTX 3080, and RTX 3070 – and they all are still incredibly hard to find at retailers both online and in-store (brick and mortar). When the cards do manage to come back in stock, they are sold out within minutes, or more precisely, seconds.

The GeForce RTX 3060 Ti includes 4,864 CUDA cores, 8GB of 14Gbps GDDR6 memory, along with base/boost clocks of 1,410MHz and 1,665MHz respectively. However, we expect AIB partners to introduce cards with faster clocks to push performance even higher.