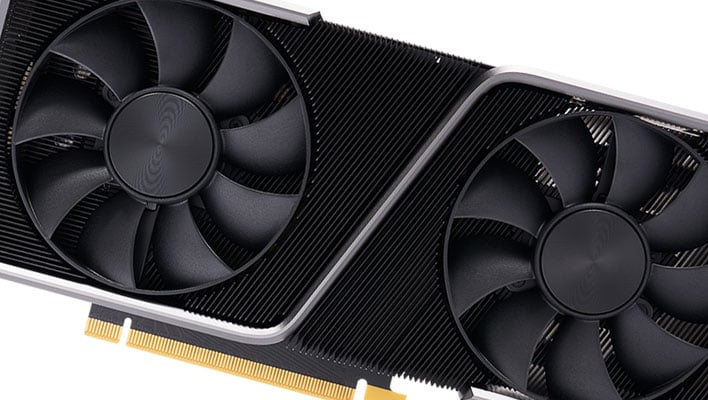 It is starting seem like it is no longer a question of whether or not NVIDIA will flesh out its Ampere lineup with a GeForce RTX 3060 Ti, but how many times will the unannounced SKU leak before it gets announced? At least one more time, apparently. The latest leak seemingly reveals a big list of specifications, if the information turns out to be accurate.
The only thing we can say for sure is that NVIDIA will eventually get around to launching more Ampere cards. It came out of the gate with three high solutions, including the GeForce RTX 3090 (this generation's Titan RTX, basically) priced at $1,499, GeForce RTX 3080 priced at $699, and the GeForce RTX 3070 priced at $499.
Then AMD followed suit with its Radeon RX 6000 series, which so far consists of the Radeon RX 6900 XT priced at $999, Radeon RX 6800 XT priced at $649, and Radeon RX 6800 priced at $579. While AMD and NVIDIA are battling it out for performance bragging rights, they will each eventually shift to bolstering their respective lineups with more offerings at additional price points.
Hence the GeForce RTX 3060 Ti that has been the subject of numerous leaks and rumors. The latest comes from Manli, a brand that is perhaps not well super known in the US, but has been around since 1996. Have a look at this... 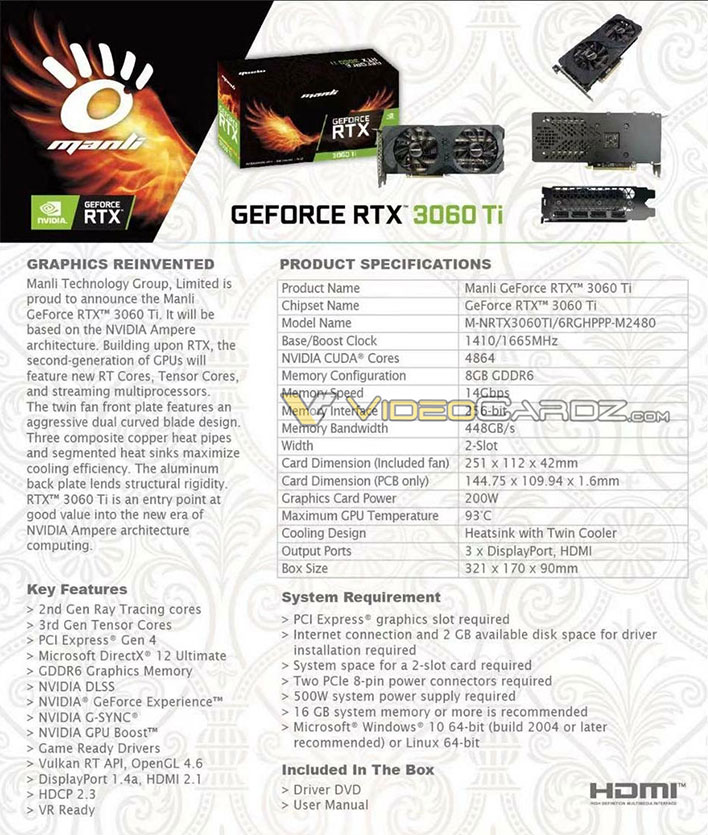 I was unable to track down this listing for myself (so take it with a grain of skeptical-flavored salt), but the folks at Videocardz somehow obtained a screenshot, presumably either before it was taken down, or from an outside source. Either way, it purports to show nearly all of the specifications.
If the listing is accurate, the GeForce RTX 3060 Ti will arrive with 4,864 CUDA cores and 8GB of GDDR6 memory (14Gbps), along with a 256-bit memory bus for 448GB/s of memory bandwidth. As for the clocks, it is show as having a 1,410MHz base clock and 1,665MHz boost clock.
Here is how that slots into the current lineup...
So it is essentially a cut down version of the GeForce RTX 3070—it has fewer cores and slower clocks, but the same amount of memory, same type of memory, and the same memory bus. You can expect fewer RT cores too.
As the rumor goes, the GeForce RTX 3060 Ti will be announced on December 2.