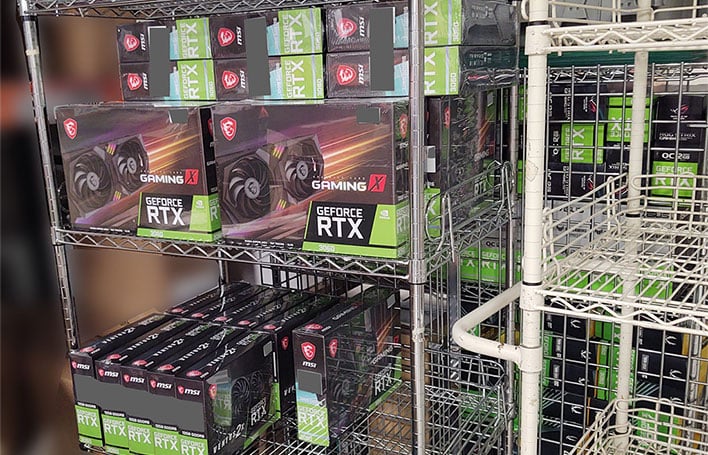 In just a few more days, NVIDIA will release its most affordable graphics card based on Ampere yet, that being the GeForce RTX 3060 (not to be confused with the GeForce RTX 3060 Ti). And as you might expect, retailers are ready to go. Or at least one of them is, with pictures showing multiple retail boxes from various different brands stuffed onto metal racks.
These are all custom models from NVIDIA's add-in board (AIB) partners, including ASUS, MSI, and Zotac. The pictures highlight five different models in all, with what appears to be dozens of retail cards ready to be sold to the public when the launch date—Wednesday, February 25—rolls around. 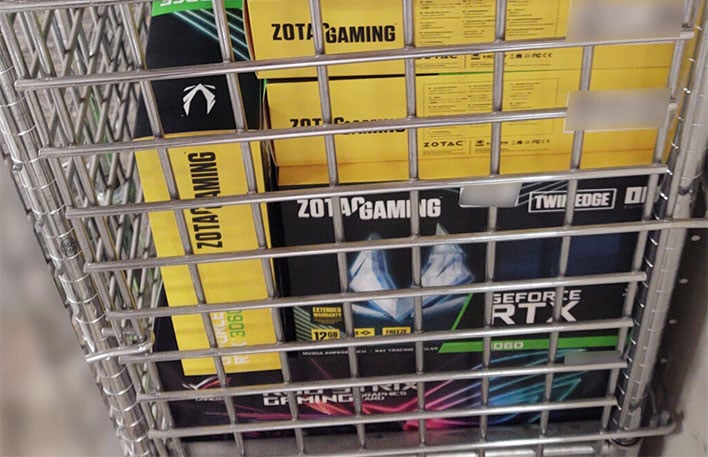 The folks at Coreteks posted several pictures of the retail boxed cards, and also passed along some pricing information. Here are the specific models and retail pricing, according to the site...
It's not clear if the above pricing is reflective of one particular retailer, or if those are MSRP's put out by NVIDIA's hardware partners. Hopeful the former, because they are all well above NVIDIA's advertised starting price of $329.  Likewise, the GeForce RTX 3060 Ti is supposed to start at $399 (street pricing is higher across the board for graphics cards).

As to how long the GeForce RTX 3060 remains available, we'll have to wait and see. Our expectation is that they it sell out just as quick as every previous GeForce RTX 30 series SKU. To help get the upcoming cards into the hands of actual gamers, NVIDIA said it gimped the cryptocurrency mining hash rate, making it far less useful for mining Ethereum. Still, the demand for GPUs is red hot even without mining thrown into the picture.

How will the GeForce RTX 3060 perform? Some leaked benchmarks may provide a clue. Obviously it will perform somewhere south of the Ti model, even though it has more memory. But the question is, how far below?

A listing in the Ashes of the Singularity benchmark database shows the card scoring 6,800 at the Crazy 1080p preset, in a testbed with an Intel Core i7-8700K processor and 32GB of RAM. If you look for other scores with the same specs and settings, here's what we find...
AOTS is not the most reliable benchmark in the world, so take the leaked score and comparison data with a dose of salt.
What we know for certain is that the GeForce RTX 3060 will arrive with 3,584 CUDA cores with a 1.32GHz base clock and 1.78GHz boost clock, 12GB of GDDR6 memory, and a 192-bit memory bus, because NVIDIA has already published those specifications.
As a point of comparison, the GeForce RTX 3060 Ti wields 4,864 CUDA cores with a 1.41GHz base clock and 1.67GHz boost clock, and 8GB of GDDR6 memory on a wider  256-bit memory bus.
Look for more clarity on performance later this week, when the card launches and the embargo on reviews is lifted.