Earlier in September, Sony apologized for the PlayStation 5 preorder catastrophe and promised more console preorders soon. It seems; however, the preorder nightmare never ends as GameStop Ireland has begun to email customers stating they will likely not be getting a PS5 for quite some time.

When the PlayStation 5 preorders kicked off, it was utterly chaotic. Preorders went out of stock near instantaneously, and Sony later apologized. Then, retailers such as Amazon began to crumble, announcing customers who preordered the PS5 may not get it on launch day. Now, our tech friends across the pond are encountering similar issues to a higher degree with Ireland’s GameStop chain indicating that customers might not see their preorder arrive until 2021. 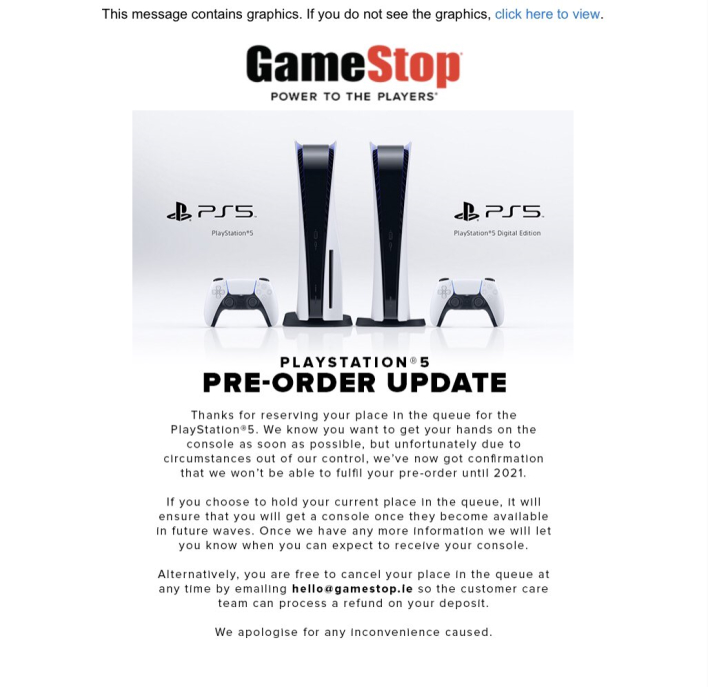 As GameStop puts in the email, it is due to “circumstances out of [their] control.” Yesterday, when Sony sent out stock numbers for PS5s, the retailers did the math and found they would not fulfill all the preorders that came in. This shortage in supply could be due to various reasons, such as COVID-19 causing logistics and supply chain issues or simple parts production limits.


While Sony is to blame for not correctly setting preorder limits, they are not to blame for product shortages. If this launch were to go without a hitch honestly, it would have made more sense to under-allot preorders and increase them later once stock numbers were confirmed. Overall, this PS5 preorder ordeal is still a mess, and gamers will not be able to play their favorite next-gen PlayStation games on time as expected this year.
(Email Image Courtesy of Video Games Chronicle)