When we think of MediaTek, the first thing that often comes to mind are budget-oriented SoCs used in low-end smartphones and Chromebooks. On the other hand, NVIDIA's GeForce RTX brand invokes high-end gaming GPUs in gaming desktop and laptop PCs. However, it looks as though those two forces are linking up thanks to a brief mention by NVIDIA CEO Jensen Huang during today's GTC 2021 keynote.

About halfway through his presentation, Huang presented a slide entitled "Expanding Arm Ecosystem Beyond Mobile," which mentioned MediaTek's collaboration. According to NVIDIA, it will be licensing its GeForce RTX 30 Ampere IP for use in MediaTek MT819x SoCs. 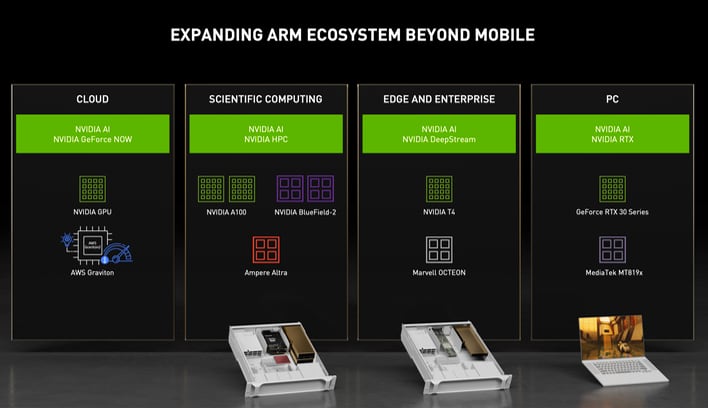 "We're announcing a partnership with MediaTek to create a reference system and SDK for Chrome OS and Linux PCs," said Huang during the presentation. "MediaTek is the world's largest SoC maker. Combining NVIDIA GPUs and MediaTek SoCs will make excellent PCs and notebooks."

While we might be most familiar with Ampere in desktop and laptop applications (where it draws a considerable amount of power), Ampere can also be scaled down for low-power situations. We see this with NVIDIA's Orin SoC which includes Hercules Arm CPUs and Ampere GPUs in a TDP ranging from 5 to 45 watts.

By leveraging GeForce RTX 30 Series GPUs in its SoCs, MediaTek will see a significant boost in graphics performance, which could pay dividends for future Chromebooks and potentially smartphones and tablets. In the Chromebook space, this could make the value-driven platform more palatable to gamers.

No timetable was given for when we'll see the first MediaTek SoCs with GeForce RTX 30 GPUs.

NVIDIA rival AMD has sought a similar collaboration with Samsung. The pair announced an agreement to infuse Samsung's Exynos SOCs with custom Radeon RDNA-based GPUs. Rumors have suggested that the first fruits of this partnership could arrive in Q1 2021, but it remains to be seen if the current turmoil in the chip world will delay that introduction.