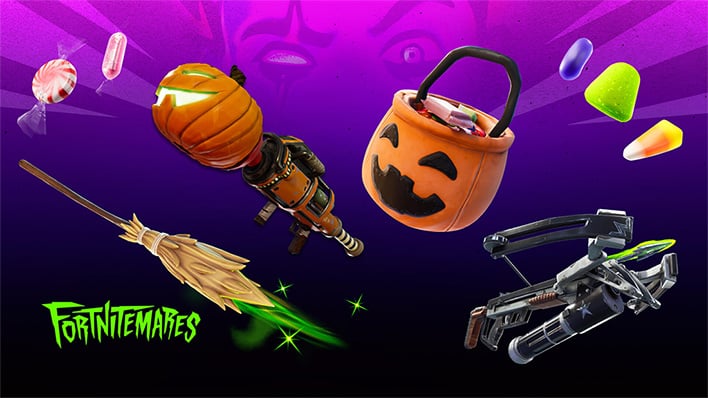 The current pandemic will almost definitely put a damper on trick-or-treating this year, but there are other ways of getting into the Halloween spirit, all while remaining safely isolated in your home. I'm talking about themed events in popular games. As I wrote about yesterday, Rocket League is enjoying a Ghostbusters crossover with its Haunted Hallows event, and starting today, Fortnite is having a spooktacular time of its own, by bringing back its cleverly named Fortnitemares event.
"From October 21 until November 3, rise to the occasion in the return of Fortnitemares. In Fortnitemares 2020: Midas’ Revenge, don’t let the tomb hold you back from haunting the living. And while you’re at it, why not liven up your afterlife a little? Vanquish Challenges, hang out at a party, tour the Ghoulish Isles, or try some crafty cosplay IRL," Epic Games says.
Check out the following trailer to get in the ghoulish mood...


This is the third year that Epic Games has kicked off its Fortnitemares event, with Shadow Midas making a return from his debut in Fortnite Chapter 2. He and his henchmen have taken over The Agency, and you can join in the fun by haunting your adversaries on the island, if you wish.

"After being eliminated in Solo, Duos, or Squads, return to battle as a Shadow for your shot at a Nitemare Royale. Join fellow Shadows to defeat survivors by using your otherworldly abilities, like possessing the body of vehicles," Epic Games says.
Themed weapons abound, as you might imagine, including a Pumpkin Rocket Launcher and Fiend Hunter Crossbow. And of course you take flight on a Witch Broom, because that's what you do in the Halloween season (especially if you're restricted from going door-to-door filling your sack with gifted candy).
There are new challenges as well. Completing them will unlock various rewards, like Midas' Shadow Wrap and the Smash O'-Lantern Pickaxe, which you can use all year long, well past Halloween.
On the big day (October 31), Latin Grammy winner J Balvin hold a special performance at the Afterlife Party. It begins on the main stage in Party Royale at 9:00 pm ET (6:00 pm PT), though there will also be a rebroadcast for anyone who misses it.