Fortnite remains one of the most popular games around, and is a veritable golden goose for developer Epic Games, despite being free-to-play (there is big money earned through in-game purchases). Perhaps in an attempt to ensure it stays that way, Epic Games has just added a new and intriguing feature to Fornite, that being in-game video chat.
The new feature comes courtesy of a partnership with Houseparty, a free social networking app that recently enjoyed a rise in popularity. Apps and services like Houseparty are seeing increased usage in large part because of COVID-19 and continued calls to social distance from one another, and work and play from home.
The latest Fortnite update integrates Houseparty to enable video chat on PC, PlayStation 5 (for those of you lucky enough to have scored one), and PlayStation 4. Players also need an Android or iOS handset with the app installed, and are required to link their Houseparty and Epic Games account. As an added incentive, those who link their accounts will unlock a Rainbow Fog Wrap (you can also obtain it by playing five matches between 12:00 am ET November 20 and 11:59 pm ET November 26).

I think enabling this functionality through a webcam would be better, but at least for now, users are asked to position their mobile device (phone or tablet) so that their face is fully in the frame. The group video chat then appears both on the mobile device and in a sidebar in Fortnite. 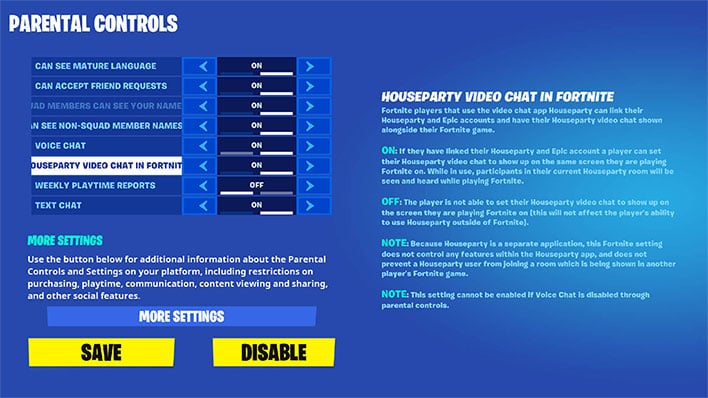 Having a large audience of kids and teens, there are obviously some privacy concerns that come with this sort of thing.
"Houseparty video chat in Fortnite is cropped to focus on player faces. You will be given a Fortnite-themed virtual background so only your face is shown to other players. Parents can turn off Houseparty video chat within Fortnite’s Parental Controls. Houseparty video chat on Fortnite is designed for ages 13+ since you must be at least 13 years old to create a Houseparty account," Epic Games says.
As for who can join, Epic Games says it is limited to Houseparty friends, and friends of anyone in your Houseparty room. Users also have the ability to block people by tapping on their mug and selecting Block, and likewise can utilize a "Report a Player" function, if need be.
We'll have to see how this ultimately works out, and perhaps the privacy implications are why Epic Games is limited support to PC and PlayStation at the moment. The developer says it will let everyone know when and if it is able to support more platforms down the line.