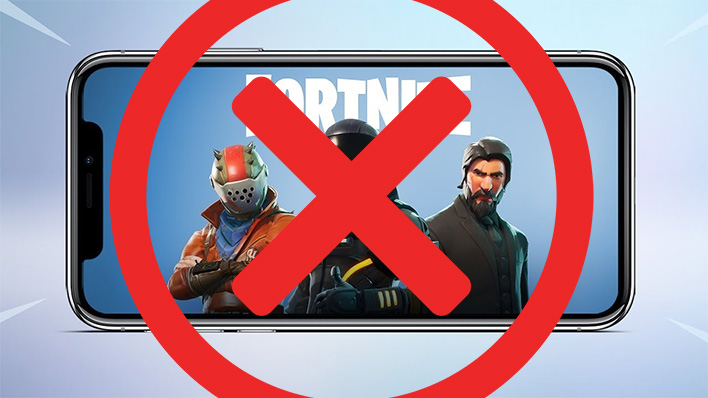 Epic Games is gambling that it will win its lawsuit against Apple over a tweak to in-game payments in Fortnite, which enables players to make direct payments, allowing the developer to effectively bypass sharing a 30 percent cut with Apple. Maybe it will, probably it won't. It is also trying to win in the court of public opinion, by sending emails to Fortnite players on iOS who will not receive the latest update.
Before we get to the emailed text, let's quickly recap. The Cliff Notes version is, Apple collects a 30 percent royalty on sales from apps in its App Store, including in-game purchases. Epic Games agreed to this when it put Fortnite in the App Store. Then earlier this month, Epic Games decided to challenge Apple on its terms by updating Fortnite to exclude Apple from collecting a royalty on in-game payments, and all hell broke loose.
Apple responded by booting Fortnite from the App Store and is further trying to kick Epic Games from its developer program. Epic Games then sued Apple and won a temporary restraining order from being kicked as a developer, but was unsuccessful in getting Fortnite reinstated in the App Store in its current state. And so here we are.
In an email to Fortnite players on iOS, Epic Games lays the blame squarely on Apple, saying it is "blocking Fortnite updates and new installs on the App Store, and has said they will terminate our ability to develop Fortnite for Apple devices. As a result, the Chapter 2 - Season 4 update (v14.00), did not release on iOS and macOS on August 27."
It is a little disingenuous to frame the situation this way. Epic Games could in fact get Fortnite reinstated in the App Store and provide updates to existing owners, if it went back to honoring its agreed upon terms with Apple and stopped bypassing the company's royalties. Apple even argued that point in response to the lawsuit, adding that Epic Games would even still be free to pursue its legal claim.
Epic Games does not mention that aspect in its email.

"Apple limits competition so they can collect 30 percent of consumer payments made in apps like Fortnite, raising the prices you pay. Epic lowered prices through a direct payment option, but Apple is blocking Fortnite in order to prevent Epic from passing on the savings from direct payments to players," Epic Games added in its email.

"Epic has taken legal action to end Apple's anti-competitive restrictions on mobile device marketplaces. Papers are available for our August 13, August 17, and August 23 filings. In retaliation for this action, Apple blocked your access to Fortnite updates and new installs on all iOS devices," the developer said.
Meanwhile, Fortnite players are caught in the middle of this tiff. It's somewhat similar to when cable and satellite TV providers block certain channels during contract negotiations, when existing agreements expire.
Apple is not sending out emails of its own, but it did go into troll mode by promoting PUGB Mobile on the App Store and on social media. Touché, Apple.