For those of us who are a certain age, the 1980s had the best after-school cartoons and comic books. Little did we know it at the time, but the toy companies were the masterminds behind some of our favorite '80s action heroes. For instance, He-Man and the Masters of The Universe created by Mattel, and both The Transformers and G.I. Joe were the work of Hasbro. While G.I. Joe wasn't the absolute favorite in my house (that honor goes to The Transfomers) it was a big hit. It's also a natural fit to cross over into existing video game universes like Fortnite, and that's exactly what's happening right now.

Mysterious G.I. Joe team member Snake Eyes was always a dangerous ninja. In the past, he had a deep and complex history with Cobra Commander, but joined the G.I. Joe team when the Arashikage ninja clan dissolved after bumping into Scarlett during a training exercise. In Fornite, he's a badass ninja skin that's part of the Arashikage Clan set in the shop. That set includes the ninja master himself along with a katana pickaxe and some back bling. That'll set you back 1,800 V-bucks, the value of which varies depending on a few factors, including how much real-world cash gamers put up at a time to acquire them. 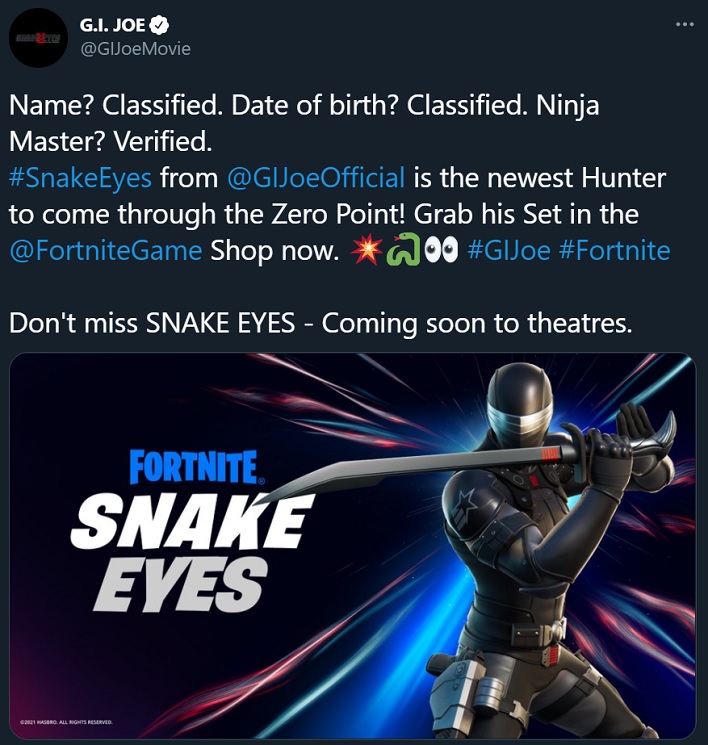 Snake Eyes is also returning to the toy aisles of retailers everywhere, as well. Hasbro has announced Snake Eyes: Zero Point Edition, which is a six-inch action figure with over 20 points of articulation. Hasbro says that this crossover collectible figure comes with a big pile of accessories including a harpoon launcher, model grenades, and Snake Eyes signature katana, Morning Light. Snake Eyes: Zero Point Edition can be pre-ordered through Hasbro's website for a cool $39.99.

The Arashikage Clan set is already available for purchase in the Fortnite store, ready to take you back to a simpler time. This crossover ties into the Snake Eyes live-action spin-off movie due to come out later this year. Snake Eyes is a spin-off of the live-action G.I. Joe movie series from Paramount, which has hit theaters over the last decade. The upcoming movie may not be something you already knew about, but now you do. And as they say, knowing is half the battle. Yo Joe!