Tesla is by far the most prominent and respected name in the electric vehicle (EV) market. The company was a scrappy upstart with its original Roadster, and then completely revolutionized the EVs with the Model S. Tesla went onto flaunt excess with the Model X and its Falcon Wing doors, and hit mainstream gold with the Model 3, which was followed up by the Model Y.

With Tesla leading the EV charts in both market and mind share, it should come as no surprise that it is often a frequent target of critics. Many of those critics are competing auto manufacturers, including Ford. Ford has a major EV release of its own for 2021, and it's called the Mustang Mach-E. The Mach-E will be going toe-to-toe with the Model Y, and naturally Ford is quite confident in its ability to compete in this space with a vehicle that was designed from the ground up to be an EV, rather than a compliance car (like the Focus Electric from the previous decade).

Ford's Darren Palmer (Ford's Global Director for Battery Electric Vehicles) recently gave an interview with Autoblog, and of course talked up the Mach-E. In the interview, he rather curiously threw shade at Tesla without even mentioning the company by name. But given what claims he made with his statements; everyone knew exactly what company he was talking about.

Palmer talked about how Ford customers aren't willing to accept certain flaws in their vehicles, and that they expect EVs to be just as reliable as their internal combustion engine counterparts while exhibiting excellent quality control. “The doors fit properly, the plastics and other materials color-match," said Palmer.

"The bumpers don’t fall off, the roof doesn’t come off when you wash it, the door handles don’t get stuck in cold weather."

Hey @elonmusk why didn't you tell us that Tesla sells convertibles now? Because the roof of our brand new model Y fell off on the highway pic.twitter.com/s8YNnu7m9L

All those maladies are attributable to Tesla vehicles. Teslas are notorious for fit and finish issues from mismatched trim pieces, to the aforementioned door alignment problems. The comment about bumpers falling off is attributed to the Model 3, which could have its rear bumper ripped completley off during heavy rain (through no fault of the driver). The problem has been around since the Model 3 was first introduced three years ago, but Tesla only recently even acknowledged the problem.

Another recent example of shoddy Tesla build quality came when a brand-new Model Y's entire glass roof flew off on the highway. The vehicle had just been purchased, and the owners were driving the car home when the Model Y turned into an impromptu convertible. All auto manufacturers have quality controls problems, but Tesla has become a punching bag for its "Detroit in the 1980s" level of quality control. The company also ranks dead last in JD Power's Initial Quality rankings. 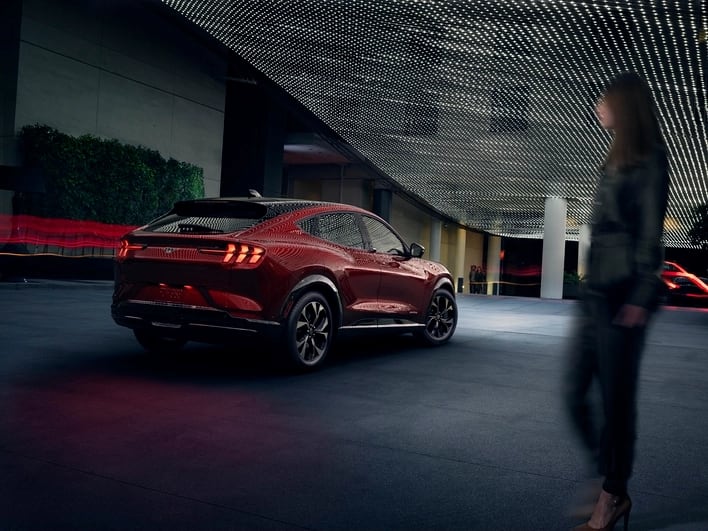 With that being said, perhaps Ford doth protest too much? After all, this is the same company that has recalled its brand new 2021 Explorer crossover a total of 10 times during its first model year. Its most recent recall involved 1,405 vehicles with faulty engine mounts that could result in a loss of power. As they say, people in glass houses...

Ford’s Mustang Mach-E has a base price of around $44,000 and will be available in both rear-wheel drive and all-wheel drive configurations. The vehicle can travel up to 300 miles per charge with the 98.8 kWh battery pack and RWD, and there will be a monster Mach-E GT that will pump out a healthy 459 horsepower and 612 lb-ft of torque. The Mach-E GT, however, has a loftier base price of over $60,000.