Intel Arc Alchemist Loses To RTX 2060 In Leaked Benchmark, Should We Be Concerned?

As we wait for Intel to introduce its first modern discrete desktop graphics cards, the leaks and questions are starting to pile up. For example, will Arc Alchemist in flagship form give AMD and NVIDIA a run for their money in the high-end GPU space? What will inventories look like, and what price points are we looking at? We won't have concrete answers until next year, which is in part what makes benchmark leaks so interesting in the meantime. Even ones that land with a whimper.
Such is the case with a series of leaks that popped up over at Geekbench. An apparent test platform wielding what purports to be an Arc Alchemist GPU with 512 execution units posted some rather lethargic scores, compared to its presumed positioning among the competition. But the low scores come with some potentially important caveats. 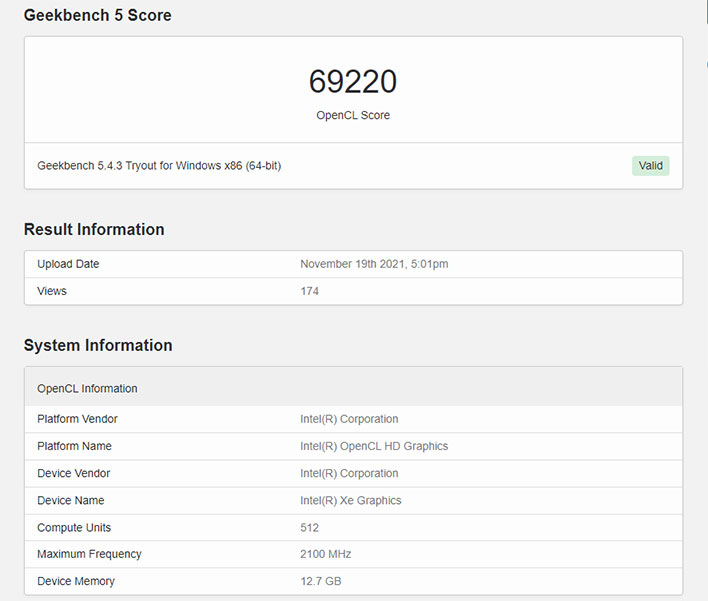 According to the database entries, the test platform also sports an older Intel Core i5-9600K processor based on Coffee Lake and 16GB of DDR4 memory. But the GPU specs are of more interest here. All four database entries are from the same platform, and they identify the "Intel Xe Graphics" as having 512 EUs, which is the top configuration for Arc Alchemist.
They also highlight 12.7GB of memory, though that's probably an incorrect reading (it's believed Arc Alchemist will feature 16GB of GDDR6 memory). As to the OpenCL scores, well, here are the four benchmark runs...
Geekbench maintains a collection of average scores in each of its benchmarks, and in this case the leaked Arc Alchemist benchmark runs come in slightly below a GeForce RTX 2060 (70,664) and a Radeon RX 5700 XT 50 Anniversary Edition (70,580).
Some other sample comparison...
Should we be concerned? It's been suggested that while the Arc Alchemist GPU is shown with a 2,100MHz boost clock, it actually ran at 1,329MHz. However, from what we can tell that is a misreading of the database entries—it's the DDR4 memory that is shown running at 1,329MHz (2,658MHz effective), not the GPU.
Nevertheless, it is actually possible that this test platform scaled back the clocks. We also have to keep in mind that drivers play a big role in performance, and Arc Alchemist won't even be out until next year. Rumor has it Intel's flagship GPU will perform in the ballpark of a GeForce RTX 3070 Ti.
If the majority of leaks look like these, then it will be cause for concern, especially as an actual launch draws near. For now, however, we're remaining cautiously optimistic that something is very off with these results.