The recently introduced Ferrari 296 GTB is a plug-in Italian hell raiser that will likely set prospective buyers back somewhere north of $300,000. That means my chances of ever owning one are next to zero. If you're in the same boat, fret not—you can at least virtually experience 819 horses pulling the sexy red wagon in Fortnite, where the Ferrari 296 GTB has cruised onto the scene as the game's first licensed vehicle.
Sure, plenty of other vehicles have found their way to Fortnite, including taxis, pickup trucks, and even grocery carts. But none up to this point have been real-life, licensed vehicles. That changes right now, with the Ferrari 296 GTB having just been unlocked, provided you know where to find it (more on that in a minute), with three Epic Quests in tow.

The Ferrari 296 GTB is a veritable beast with a plug-in hybrid powertrain. A mid-mounted 2,992-liter V6 engine sports an unorthodox 120-degree layout, along with twin turbos tucked in between the "hot-vee" to help deliver a quick throttle response. And don't let the V6 displacement fool you, this thing is seriously powerful—the total package adds up to a combined 819 horsepower and 545 lb-ft of torque.
Stomping the pedal to the metal results in a 0-60 miles per hour time of just 2.9 seconds, and if you keep going, you will reach a top speed of 205 miles per hour. That's a lot of power.

Where To Find The Ferrari 296 GTB In Fortnite 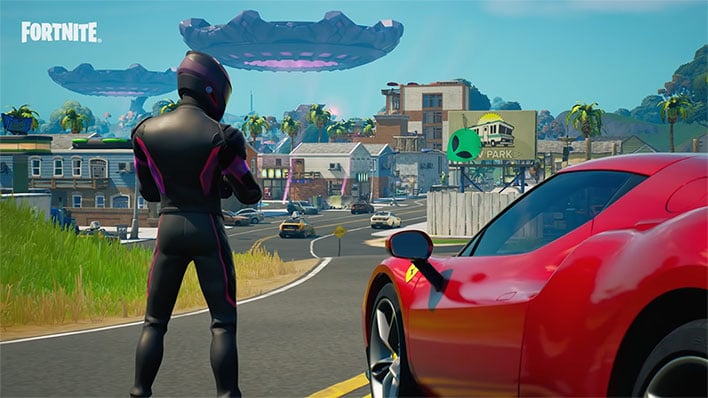 As to where you can find the Ferrari 296 GTB in Fortnite (if you're not busy milking Inflate-A-Bull Cows), your best bet is to mosey on over to Believer Beach (previously known as Sweaty Sands), towards the northwest section of the map, south of Coral Castle and north of Holly Hedges.
There are at a few different places where it might spawn. One is the car park that is east of Believer Beach, and another is at the gas station on the road that goes west out of Believer Beach. You can also find it in Lazy Lake on the southwest section of the map (northwest of Catty Corner).
Once you have it, there are three quests you can partake in...
To hit the top speed, just find a long road that goes relatively straight, then floor it and don't stop until you see a notification saying you've successfully completed the quest. The Time Trials quest can be completed in Lazy Lake, and for the Storm quest, just drive to wherever the boundary is at and go through for a few seconds.
The Ferrari 296 GTB will remain available until October 6, 2021.