It's always risky to give an app access to a social media account. Legit apps can create some fun on social media. For instance, at the end of each year, lots of users on social media love to create collages or video montages of their most popular posts. However, when an app claims to do one thing but in reality hijacks, modifies, or even deletes a social media account, it can be an arduous task to get control back. The target this year seems to be fake apps to create "Top Nine" posts on Instagram.

Developer BetaLabs has created and maintained CreatorKit since 2016, and one of its functions is to create and post a Top Nine collage. To do so, the app needs access to an Instagram account. The company says that this has spawned copycats that claim to create Top Nine posts of their own. In reality, BetaLabs says, these apps will take control or modify an Instagram account to make spam posts and spread their own faked apps to gain control of accounts of followers, too. It wouldn't be surprising to learn this is the case, as apps and even Chrome extensions can wind up covertly doing things that users should never allow.

BetaLabs says it knows about these apps at least partly because users complain to its support staff that their Instagram accounts have been hacked, hijacked, or even deleted. In reality the user fell for a fake app and willfully (yet unknowingly) handed over the keys. In a blog post, BetaLabs warns users that its app is only accessible through its CreatorKit platform. Interestingly, one warning sign that an app may not be legit is that users with public accounts shouldn't have to sign in to create a Top Nine, since its app can see the posts already. Fake apps will also try to hide their URLs, where the CreatorKit website will appear in the address bar on BetaLabs' service. 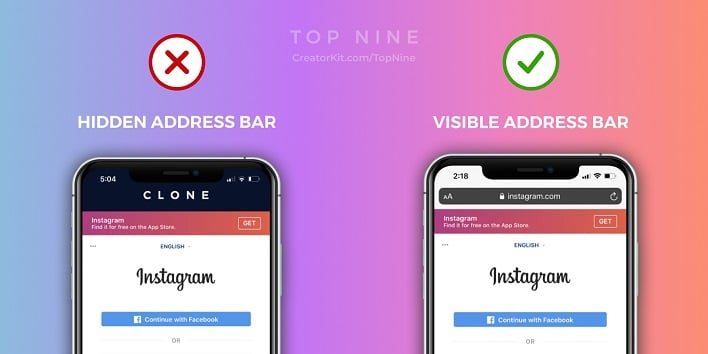 It's also a good idea to take a regular audit of the apps that are connected to social media accounts. Instagram has a step-by-step guide for seeing which apps have access to an account, and removing an app that doesn't belong is simple. Inside the Instagram app, access the Settings screen and choose Security. On this page, seelct Apps and Websites. Now you'll be presented with a list of all the apps and sites that have been linked to this account. Here, you can remove anything that's not familiar or which shouldn't be there.

While we're sure that the company would love for more users to get onto its platform, as it makes its money by selling an upgrade Pro service. However, BetaLabs' post serves as a good general warning about fake apps on social media. Things are not always what they seem, and it's never a good idea to just click random links in feeds or emails. Platform owners don't always do a great job of curating their platforms. It seems like there's frequently some rogue browser extension or ransomware making its way into an app store. Not only that, but users have to protect themselves from phishing emails and other social engineering experiments, too. Stay safe out there.