Facebook has introduced a new way for friends or coworkers to get together during the coronavirus pandemic, called Messenger Rooms. Facebook says that Messenger Rooms was designed to allow people to spend "quality time with friends, loved ones, and people who share their interests." Users can create a room from within Messenger or Facebook and then invite anyone to join the video call, even if they don't have a Facebook account.

Messenger Rooms "will soon" hold up to 50 people with no time limit. Users can start and share rooms on Facebook through News Feed or Groups and Events. The social network says that it intends to soon add ways to allow users to create Rooms from Instagram Direct, WhatsApp, and Portal. Joining Rooms can be done from a phone or computer without needing to download software to get started. Users with the Messenger app can use AR effects like Bunny ears and new AI-powered features such as immersive 360 backgrounds and mood lighting. 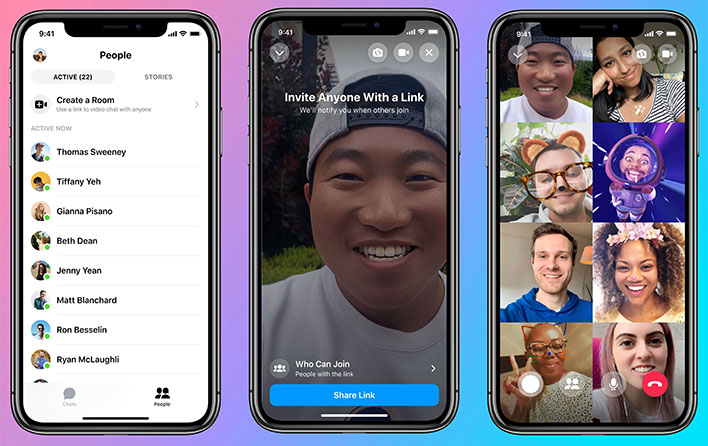 The room creator will be able to choose who can see and join the room. Rooms can also be locked to prevent anyone else from entering, if needed. There are several controls that the room organizer has, including the ability to lock the room and the ability to remove unwanted participants. Any user can leave a room at any point if they want to, Facebook says because a room is locked doesn't mean users can't leave. There is a reporting function that allows a room name to be submitted if users believe the room violated the Community Standards.

Facebook does collect data from Rooms, regardless if the user joins through one of the apps, or joins without logging into an account. The company says the main purpose of that data gathering is to improve the service and product experience.

Facebook notes that audio and video from rooms won't be used to target ads, and no ads will be shown in rooms. You can read the company's privacy statement on Messenger Rooms, here.