Facebook has been working hard to adhere to Apple's new privacy policy that will soon be implemented across its iOS and iPadOS platforms. Apple's goal is to give users more granular control over what personally-identifiable data can be obtained and used by installed apps. And that pertains to all third-party apps; no one is going to be getting a free pass here. Well, with the exception of Apple apps, which we'll discuss a bit later.

This of course is of obvious concern to a company like Facebook, which has built an entire business model around knowing just about everything possible about you and your likes/dislikes to build a global social networking behemoth. But after Apple announced the elimination of the Identifier for Advertisers (IDFA), there were bound to be more instances of the the Cupertino-based company butting heads with Facebook.

Now, Facebook is trying to get out ahead of the Apple privacy policy change in iOS 14, which still doesn't have a set-in-stone release date. The the new pop-up message shown below explains that tracking app and website activity will "provide a better ads experience." Moreover, Facebook will only collect data that it already has previously accessed. 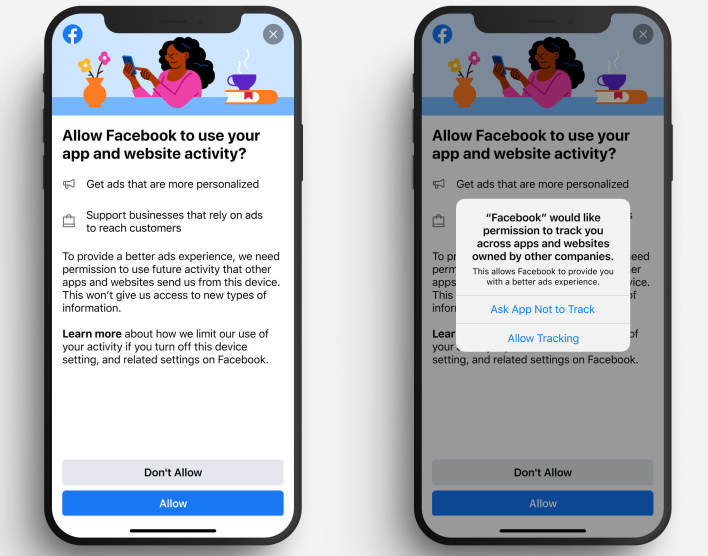 As tracking users across websites and apps not a perfect technology, there is certainly room for improvement for advertising to better customer privacy while still meeting they end goals. Furthermore, tracking users across websites can be used to better ad experiences, but the data collected doesn't need to be intrusive. For example, Google is working on modifying its tracking tech to anonymize how data is collected, preserving user privacy.

Facebook's move comes just days after Apple CEO Tim Cook delivered some rather harsh rhetoric aimed at the company. Cook blasted the Facebook -- while not mentioning it by name -- stating at the European Computers, Privacy & Data Protection (CPDP) conference, "At a moment of rampant disinformation and conspiracy theories juiced by algorithms, we can no longer turn a blind eye to a theory of technology that says all engagement is good and the longer the better." He went on to dig the knife a bit deeper, adding, "It is long past time to stop pretending that this approach doesn't come with a cost — of polarization, of lost trust and, yes, of violence."

Facebook contends that Apple is merely playing lip service with its privacy push, and that it is punishing Facebook and millions of other businesses that rely on data tracking. Zuckerberg says that Apple doesn't hold its own apps up to the same scrutiny, and that "its claims about privacy [are] often misleading."

"We are also seeing Apple's business depend more and more on gaining share in apps and services against us and other developers," said Zuckerberg in a recent earnings call, where he also added that Apple is becoming one of Facebook's biggest competitors. "So, Apple has every incentive to use their dominant platform position to interfere with how our apps and other apps work, which they regularly do to preference their own."

Facebook is depending on platforms like Android and iOS/iPadOS to allow its users to communicate daily, so it must adhere to those policies or face expulsion the their respective app stores. However, given its business model, Google's Android is more forgiving than Apple when it comes to giving app developers more freedom to operate as they see fit.