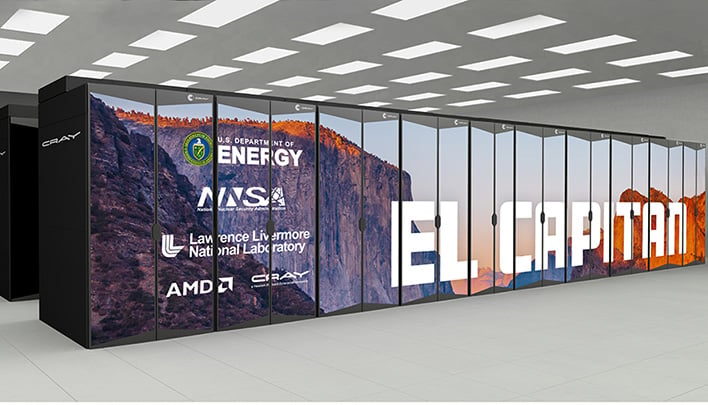 As if AMD needed any further reason to brag right now, Exascale Day will provide an opportunity for some EPYC boasting, with the company on pace to power two of the world's fastest supercomputers within the next few years. One of those is Frontier, which is anticipated to hit 1.5 exaFLOPS of peak processing power in 2021, and the other is El Capitan.
"At AMD, we look forward to celebrating Exascale Day with the rest of the HPC community. For us, it is a reminder of the important work we are doing alongside our partners to change and advance the world of computing, research, and science," AMD says.
"We’re joining with Oak Ridge National Laboratory (ORNL), Lawrence Livermore National Laboratory (LLNL) and Hewlett Packard Enterprise (HPE), to highlight how the groundbreaking Frontier and El Capitan supercomputers will transform the ability to tackle some of the world’s most important challenges including in the areas of weather, genomics, physics, biomedical data, materials science and more," AMD adds.
According to AMD, Frontier will have a dramatic impact on fields such as artificial intelligence, analytics, and simulation at scale, paving the way for scientists to crunch more calculations and identify new patterns in data.
While we still do not have a full set of details on the hardware, we do know Frontier will be powered by EPYC chips based on at least Zen 2, with specific instructions for AI and high performance computing (HPC) workloads. These custom chips will be joined by AMD's Radeon Instinct GPU accelerators with HBM2 memory to aid in deep learning performance.
Looking further down the road, El Capitan will splash onto the supercomputer scene with Zen 4-based Genoa processors (EPYC 7004) in tow, delivering more than 2 exaFLOPS of peak processing power in 2023.
"It is so fast that if all 7.7B people on earth each completed one calculation per second, it would take 8 years to do what El Capitan is expected to do in ONE SECOND! The system was designed with the goal to excel at AI and machine-learning data analysis to create models that are faster, more accurate, and capable of quantifying the uncertainty of their predictions," AMD says.
This year's Exascale Day, scheduled for October 18, is just the second one. Ahead of the event, AMD and HPCwire hosted a discussion on exascale computing with researchers from Oak Ridge National Laboratory (ORNL). It is about 24 minutes long, and you can check it out at HPCWire.