The land of luxury of motherboards is paved with premium features for enthusiasts, and like a penthouse apartment, there's a higher cost of living to match. In this case, you're looking at $829.99 for EVGA's flagship Z690 Dark Kingpin, a decked out motherboard loaded with bells and whistles for your Alder Lake platform.
It's obviously not for everyone, just as MSI's even pricier Z690 Godlike ($2,099 MSRP) caters to a niche demographic. The Z690 Dark Kingpin, while not cheap by any means, is a less expensive entry into the ultra high-end space, if that's where you want to go. So what exactly does it deliver for the asking price? In short, a slab of silicon traces and components to help chase world overclocking and benchmark records.
EVGA equipped the the Z690 Dark Kingpin with a 21-phase VRM (voltage regulation module) and 10-layer PCB (printed circuit board), a combination it says will help users "destroy world records." This makes for a happy home for Intel's top 12th Generation Core processors, which can be paired with up to 64GB of DDR5 memory running at up to 6,600 MT/s (OC).
There's a multi-function POST indicator on the upper-right corner of the board, underneath which sit physical power and reset buttons. It also has a safe boot button that isn't actually related to Safe Mode in Windows. Instead, it will load up the last known goods settings if something goes awry, so you don't have to resort to clearing the CMOS and start over from scratch. You're also looking at a triple BIOS setup, with a BIOS switch located halfway down near the right. 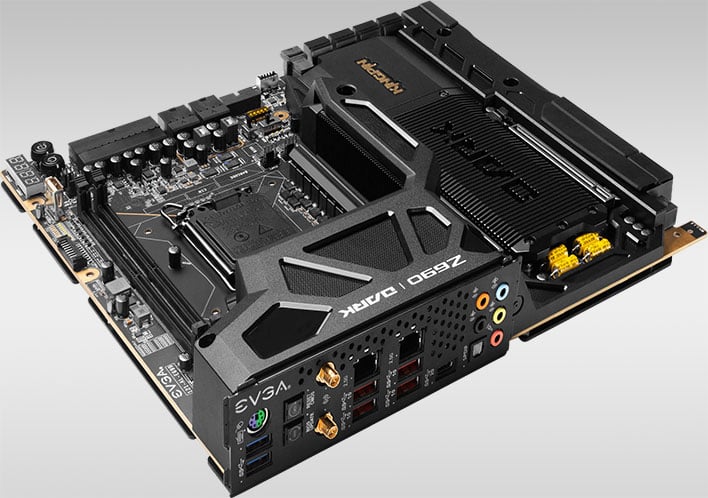 You get three M.2 slots for fast storage, sandwiched between the dual reinforced PCI Express x16 slots, plus half a dozen SATA 6Gbps ports. Other features include two ARGB and two RGB headers, right-angle power connectors, Wi-Fi 6E and Bluetooth 5.2 support, Realtek 7.1 channel audio, 100 percent solid capacitors, a 150 percent increase in socket gold content, dual Intel 2.5Gbps NICs, and a pair of USB headers.
To help keep thermals at bay and facilitate extreme cooling solutions, EVGA rotated the socket 90 degrees. A pair of fans also blow cold air over the socket area. And of course the board supports onboard temperature and voltage monitoring.

Note that this is a big motherboard in the Extended ATX (E-ATX) form factor, measuring 12 inches long by 10.89 inches wide. That means you'll need a case that specifically supports E-ATX (if it's going into a case, that is). For anyone interested, the EVGA Z690 Dark Kingpin (121-AL-E699-KR) is available now.