EVGA and its overclocking partner Vince "Kingpin" Lucido are not finished teasing the upcoming X570 Dark motherboard for AMD's latest generation Ryzen processors. In another Facebook post, Lucido showcased what he was able to achieve when pairing the X570 Dark with a Ryzen 3 5300G APU and throwing liquid nitrogen into the mix, and the results are nothing short of impressive.
The real gem here is the motherboard's ability to maintain a high Fabric Clock (FCLK), which is the frequency at which the Infinity Fabric runs at. Maintaining a 1:1 ratio, Lucido was able to crank the frequency up to just over 2.4GHz (2,432.8MHz, to be exact). Meanwhile, the LN2-cooled CPU ran at nearly 5.5GHz (5,498.72MHz).
Have a look... 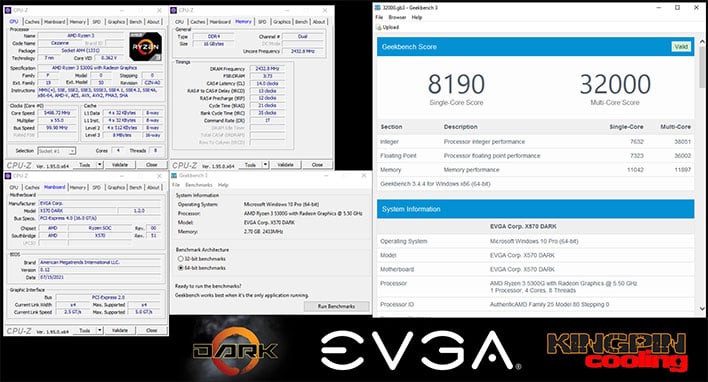 With an actual memory clock of 2.4GHz, the RAM speed is equivalent to DDR4-4800. And just as impressive, the memory timings are pretty tight, at 14-13-12-21 (and 1T). It's not clear how much voltage is pumping through the RAM, but regardless, this is quite the achievement.
"SR memory ripping again on X570 DARK @Geek3, this time with a 5300G under Liquid nitrogen cooling. You guys are going to have a lot of fun with this one, it is ready 🙂," Lucido wrote on Facebook.
The takeaway here is that EVGA's first motherboard for AMD's Ryzen processors is tuned and ready for spirited overclocking efforts. And depending on a user's skill and luck, there could be even more headroom for the FCLK—overclocker Aaron Bakaitis dropped a note in the Facebook post saying even "more [is] possible," nothing that he was able to hit 2.55GHz (2,550MHz).
As the model name suggests, the X570 Dark is based on AMD's X570 chipset. Up to this point, EVGA's efforts in the motherboard space have mostly been aimed at Intel processors. You have to go back to the Athlon 64 era for the last time EVGA launched a motherboard for an AMD processor, and that one was based on an NVIDIA chipset.
Simply put, AMD's Zen architecture is too good to ignore, particularly its Zen 3 incarnation. Hopefully EVGA will keep AMD in its sights for future offerings (like Zen 4 and Zen 5).