Like many enthusiasts, we are excited to see what kind of performance EVGA can squeeze out of AMD's latest generation Zen 3 processors when its X570 Dark motherboard arrives. There is still no official announcement or release date, just a couple of teasers. It is coming, though, and some early benchmarks have even found their way to the web.
The pending launch is notable because it has been a very long time since EVGA offered up a motherboard for AMD's processors—the last time was back in the Athlon 64 era, and that board was based on an NVIDIA nForce chipset. EVGA's X570 Dark, however, is based on AMD's X570 chipset, and is the company's first motherboard for Ryzen (EVGA sat out Zen, Zen+, and Zen 2).
Earlier this week, notorious overclocker Vince "Kingpin" Lucido posted a photo of the X570 Dark to his Facebook page, providing us with a partial look at the actual product (it's not a press render). And from what we can observe, EVGA is giving the board a proper Dark treatment, just as it did for Intel with the Z590 Dark.
As we wait for the board to become official, some interesting benchmarks have popped up online... 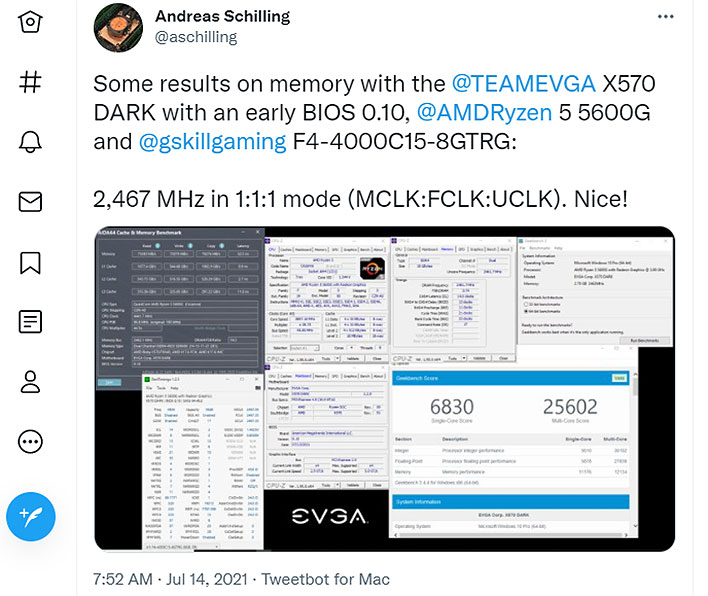 Adreas Schilling from Hardwareluxx.de apparently is in possession of the X570 Dark, and he ran some numbers with an AMD Ryzen 5 5600G APU and 16GB (2x8GB) of G.Skill Trident Z Royal DDR4-4000 installed.
Let's talk about the memory first. He managed to achieve a frequency of 2,467MHz (DDR4-4934 effective) in a 1:1:1 (MCLK:FCLK:UCLK) ratio. G.Skill rates the timings at 15-16-16-36 at 1.5V, but even with the overclock in place, he was able to set them tighter, at 14-13-11-21. According to Schilling, memory tweaks have been especially impressive when pairing DDR4 with last generation's Renoir APUs and this generation's Cezanne APUs, compared to regular desktop CPUs.

Indeed, those are impressive latency numbers at the speed he was able to achieve, and some credit has to be given to EVGA and its X570 Dark motherboard—clearly it is up to the task.
What about the APU? He ran it through a Geekbench test, but used version 3.4.4, which is two generations old at this point. That makes it difficult to analyze the scores, to which it achieved 6,830 in the single-core test and 25,602 in the multi-core test. There just is not much meaningful data out there for the dated benchmark.
Nevertheless, the memory latencies look great, as do the memory scores (the RAM achieved read, write, and copy metrics north of 70,000MB/s in AIDA64). Good stuff all around, and hopefully we'll get a chance to kick the tires on the X570 Dark ourselves.