Eurocom's Nightsky ARX315 Laptop Is Really A Desktop In Disguise, Check Out These Killer Specs

Eurocom is claiming its brand new Nightsky ARX315 laptop is the "king of the hill" and looking at the beastly specifications, it's hard to argue otherwise. The only real point of dispute is whether this is a high-performance "Superlapop!" as advertised, or a desktop masquerading as a notebook. In actuality, it's a little of both.
The Nightsky ARX315 falls squarely into the 'desktop replacement' category. While technically a laptop, it can be configured with one of three desktop processors: Ryzen 7 5800X (base configuration), Ryzen 9 5900X, and yes, even a Ryzen 9 5950X. The press release also mentions the Ryzen 5 5600X, but we didn't see it in the configuration options (perhaps it's a special order option).

Obviously this is not a laptop that concerns itself with battery life or the kind of power efficiency you would normally get from a typical notebook. The Ryzen 9 5950X is AMD's flagship consumer processor for the desktop (at least until the Ryzen refresh with 3D V-cache arrives), with a 16 cores and 32 threads to hammer away at multi-threaded workloads. This is nestled in a motherboard based on AMD's B550 chipset. 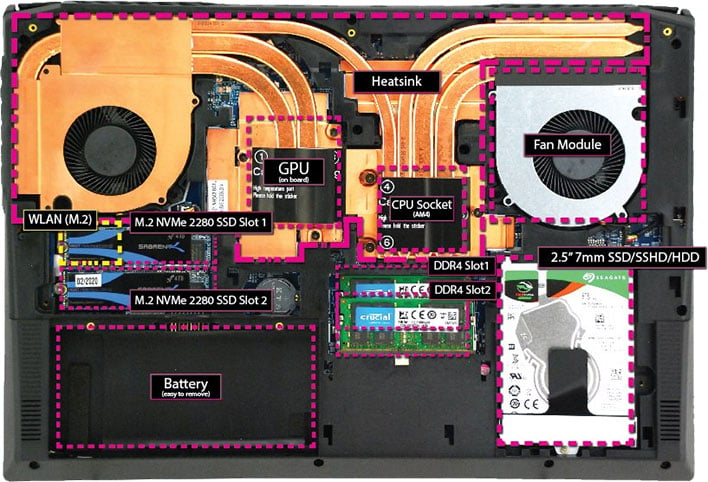 For graphics, Eurocom leans on NVIDIA's GeForce RTX 3070 in mobile form. NVIDIA affords its hardware partners the flexibility to configure is mobile Ampere series to different specifications, and it's not clear where Eurocom's implementation of the GeForce RTX 3070 lands within the 80-125W GPW and 1,290-1,620MHz boost clock ranges.
Regardless, there's a lot of firepower here to drive the 15.6-inch Sharp IGZO display and its fast 240Hz refresh rate (we're assuming at 1080p). The laptop comes stock with 16GB of DDR4-3200 RAM and a 1TB Seagate FireCuda SSD, though customers can opt for up to 64GB of RAM and up to 24TB of storage spread across three drive bays (two M.2 and one 2.5-inch).
Just for spits and giggles, we maxed out every available option and tacked on every available extra to see where pricing would land, and it came out to nearly $21,300. Yowza! A baseline configuration is obviously far cheaper, though, starting at $2,099 for Ryzen 7 5800X, GeForce RTX 3070, 16GB of RAM, and 1TB SSD. It's an additional $83 to bump up to a Ryzen 9 5900X, or $583 to max out with the Ryzen 9 5950X.
Anyone interested can hop over to Eurocom and configure a Nightsky ARX315 now.