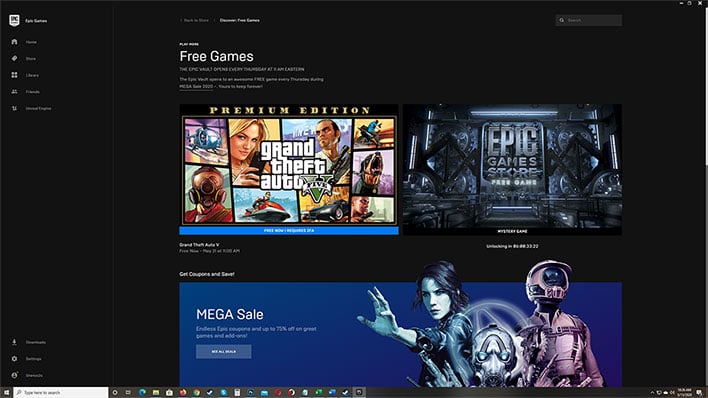 So many people flocked to the Epic Games Store yesterday to claim a copy of Grand Theft Auto V for free that the platform buckled under the pressure. That is a pretty impressive draw from a game that has been available on the PC for five years. Who knows if future free titles will bring players out of the woodwork to the same degree, though if you are wondering what is on tap, a new leak might provide the answer.
Here's the deal—Epic Games is running a "Mega Sale 2020" event with discounts of up to 75 percent and "endless Epic coupons" through June 11. While that is going on, Epic is continuing to give away games for free each week. Epic got the party started with GTA V. If you had trouble accessing the Epic Games Store yesterday, don't worry, it will remain up for grabs until May 21.
As for what games come next, Reddit user Chandigarhian posted a frustratingly foggy image purporting to show the release schedule for the next several weeks. Have a look... 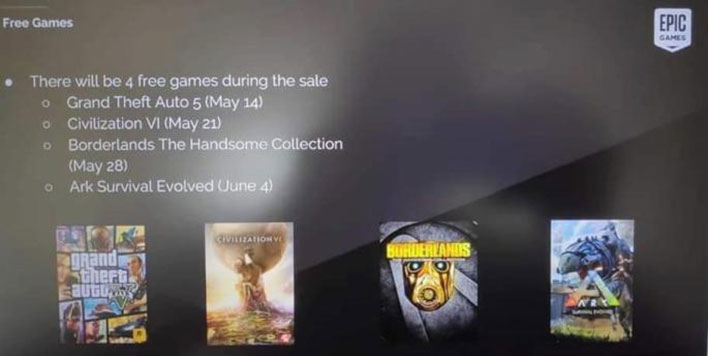 If the crappy quality photo is to be believed, Epic will be giving away Sid Meier's Civilization VI on May 21, followed by Borderlands: The Handsome Collection on May 28 and Ark: Survival Evolved on June 4.
None of those titles are currently available at the Epic Games Store. That does not necessarily mean the leak is bogus—GTA V was not available prior to it unlocking as a free game, either. These are also relatively high dollar games. Here's what they cost on Steam right now...
Normally we'd call BS straight away on a leak like this. However, given that GTA V remains a bigger title and still ended up being a free game, this list is at least plausible. It's just unfortunate that the image is such low quality, which draws suspicion—it's much easier to hide a Photoshop job behind a poor quality photo.
We'll at least find out soon enough. If next week's free game does end up being Civilization VI, it will give credibility to the leak as a whole.