There has been a massive outpouring of support for Ukraine lately. Unfortunately, the people of war-torn areas are often devastated, and displaced from their homes and belongings, with limited to no access to basic services, not to mention the potential for much worse outcomes. Many organizations and companies have have decided to try to help out as best they can, especially in terms of funding. Epic Games is one of those companies.

On March 20, 2022, Epic Games, the developers behind the mega-popular battle royale game Fortnite, announced their efforts to provide funds to charities that work towards humanitarian aid in Ukraine. The 31-year-old games development company announced that all Fortnite proceeds from March 20 through April 3, 2022 would go towards the humanitarian efforts of four organizations. 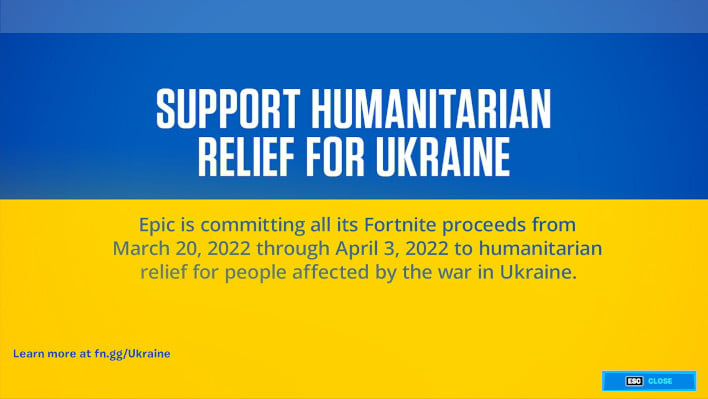 Fortnite in-game notice for Ukraine Relief
The organizations are DirectRelief, unicef, World Food Programmer, and the UN High Commission for Refugees. Not only is Epic donating all of its proceeds from Fortnite towards this effort, but Microsoft's Xbox has stated it will be joining Epic in doing so as well. That means all net proceeds through Fortnite on Xbox would also be sent to the same organizations. So, whether you buy your VBucks from Xbox or the Epic Store, you will be helping the people of Ukraine.

Epic has also stated that they will calculate their proceeds before their payment systems actually pay the company. That means that any funds raised would be sent towards these humanitarian organizations would be paid out-of-pocket by Epic before they even received the funds that people paid into Fortnite. The only exemptions from both Microsoft and Epic in terms of the funds contributed are things like required operational costs, taxes, fees, returns, and chargebacks. 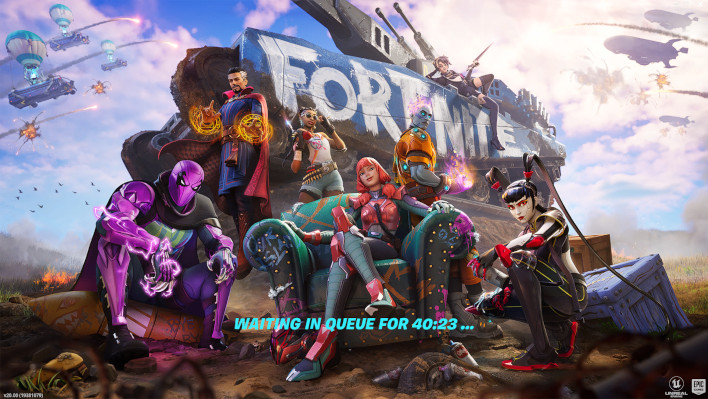 Fortnite Queue Screen showing a 40 minute wait
Fortnite had a recent patch that apparently removed building functionality, but added the Marvel Character Dr. Strange. These are some massive changes to a game that was originally conceptualized to be a cooperative PVE zombie game. All of these things combined seem to have drummed up a ton of interest, which has resulted in some  unusually long queue times.

Epic and Microsoft are not the first organizations to provide financial aid to humanitarian efforts in the Ukraine. We reported yesterday that Humble Bundle has raised over $5 million through a bundle with the same purpose in mind. Today that bundle that surpassed the $8 million mark! So, even if you don't donate directly to the organizations that provide this kind of aid to the people of Ukraine, gamers can still help in their own special way.