Just because Epic Games got a big win against Apple in court yesterday doesn't mean that the fight over the developer's cash cow Fortnite on the world's second-biggest mobile platform is over. The ruling wasn't a clean sweep for Epic, but Apple has 90 days to comply with allowing third-party payment methods on its app store in spite of the court's decision that "success is not illegal." There are still several roadblocks to Epic's return to the App Store, and in response to the company's victory, Epic CEO Tim Sweeney took to Twitter to discuss them.

In a series of tweets, Sweeney says that the ruling isn't a win for developers or consumers, but it's hard to see how that's the case. If Epic gets to go through with its plan of allowing multiple payment methods and charging less for processing the payment itself, it's hard to see how consumers don't win out. Just the mere fact that developers get their choice of payment processors is a big win for studios trying to sell content. Giving consumers the choice of those selected methods on their end can only be a good thing. 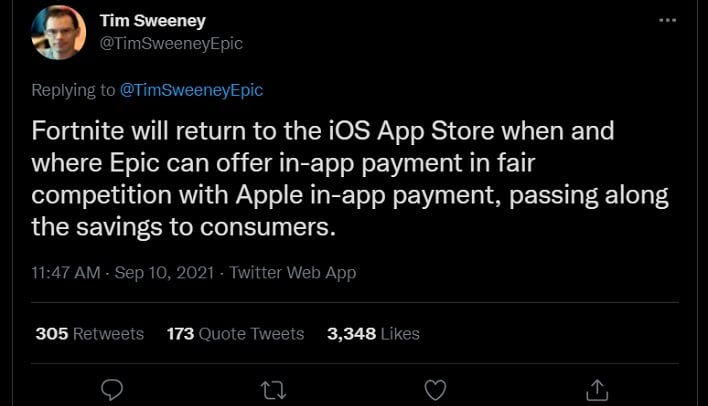 Sweeney also says that Fortnite will only return to the App Store "when and where Epic can offer in-app payment in fair competition with Apple in-app payment, passing along the savings to consumers." Apple still has time to get its act together regarding external payment methods, something the company doesn't currently allow outside of payments for physical goods like purchases on Walmart's or Amazon's mobile apps. There's also the small detail that the company's account on Apple's storefront is still banned due to a breach of contract. It's unclear if once Epic forks over $3.15 million if Apple will even allow the developer back onto the platform.

Perhaps Sweeney's uncharacteristically humble tone hints at Epic's future plans. Aside from just the Apple App Store, Fortnite is available on many walled gardens: namely, the Nintendo Switch, Microsoft Xbox, and Sony PlayStation -- the latter of which doesn't even support cross-platform play. None of those console stores currently allow for Epic to process payments on its own and take their own heavy cut just for being on the platform. The same is true of Google Play, where Fortnite is not present because Google made a similar decision. The game is available on Android, but only after side-loading it from Epic's site or downloading an Epic Games store app from Samsung's marketplace.

Whatever Epic's plans, the company hasn't exhausted its legal strategy just yet, and he made it clear that its battle isn't just with Apple. Sweeney's final tweet in the series references digital platforms -- plural -- so there's still plenty of work ahead of the developer. Whatever the next move is, you can be sure to count on HotHardware to bring the latest.