Fortnite developer Epic Games filed lawsuits against Apple and Google last year to force changes in how both companies control the method of payment within their respective app stores. Epic claimed at the time that it wasn't just taking this course of action for its sake but also for smaller developers forced to hand over a significant portion of their in-app revenue to Apple/Google.

Today, Epic scored a significant legal victory, as presiding Judge Yvonne Gonzalez-Rogers issued a permanent injunction in the highly-watched Epic v. Apple case. The ruling shut down Apple's "anti-steering" policy, which prevents app developers from providing links to other forms of payment for in-app purchases. In her order, Gonzales-Rogers wrote, "[Apple is] restrained and enjoined from prohibiting developers from including in their apps and their metadata buttons, external links, or other calls to action that direct customers to purchasing mechanisms, in addition to In-App Purchasing and (ii) communicating with customers through points of contact obtained voluntarily from customers through account registration within the app."

In short, this means that payment for in-app purchases can no longer mandatorily be processed only by Apple, allowing developer to bypass the company's 30 percent cut. So, if Epic wants to use its own payment system for Fortnite skins or Season Passes, it should be allowed to do so based on the judge's ruling. The injunction will go into effect three months from now, commencing on December 9th, 2021. 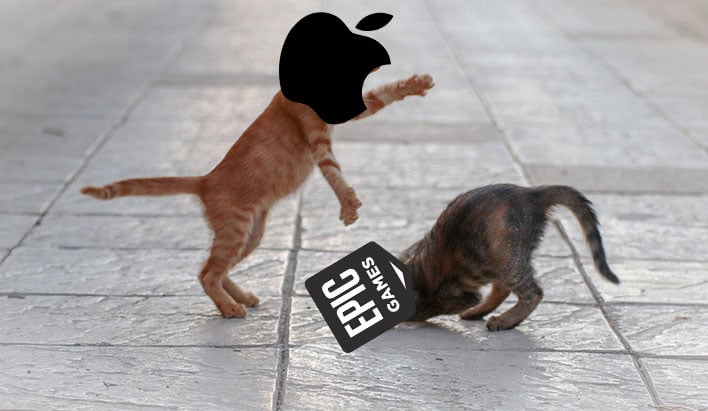 "Ultimately, after evaluating the trial evidence, the Court finds that the relevant market here is digital mobile gaming transactions, not gaming generally and not Apple's own internal operating systems related to the App Store," the judge added. "The mobile gaming market itself is a $100 billion industry. The size of this market explains Epic Games' motive in bringing this action."

It was not an across-the-board victory for Epic, however. Judge Gonzales-Rogers also ruled that Apple is not a monopoly and that "success is not illegal," pointing to the company's 55 percent market share and "high profit margins."

"The final trial record did not include evidence of other critical factors, such as barriers to entry and conduct decreasing output or decreasing innovation in the relevant market. The Court does not find that it is impossible; only that Epic Games failed in its burden to demonstrate Apple is an illegal monopolist."

However, it was found that Apple was engaged in anti-competitive behavior as defined by California Unfair Competition law. Epic also got a slap on the wrist, as it was found to be in breach of contract by implementing its own payment system within the Fortnite app for iOS, which sparked this whole Epic v. Apple fight. As a result, Epic must pay Apple 30 percent of all revenue brought in from its Epic Direct Payment system on iOS devices from August 2020 through October 2020. That amount comes to $3.15 million, which is mere pocket change when you consider the billions at stake for Apple by losing out on exclusive in-app payment access.

For its part, Apple issued the following statement after the ruling:

Today the Court has affirmed what we've known all along: the App Store is not in violation of antitrust law. As the Court recognized 'success is not illegal.' Apple faces rigorous competition in every segment in which we do business, and we believe customers and developers choose us because our products and services are the best in the world. We remain committed to ensuring the App Store is a safe and trusted marketplace that supports a thriving developer community and more than 2.1 million U.S. jobs, and where the rules apply equally to everyone.

We have reached out to Epic for comment and will update this story when we receive a response.