Years ago I cut my teeth on a Commodore 64 that my parents purchased from a family friend. Now that I've grown equally ancient in years, I've developed a fond appreciation for attempts to tap into C64 nostalgia, whether it's a throwback t-shirt or in the form of a custom-built emulator. One thing I never expected to see, however, is a pair of original Commodore 64 computers modded into a delightfully playful accordion.
The idea for such a contraption came to Linus Åkesson, an engineer who lives in Lund, Sweden. As he describes in a blog post, his custom instrument, which he cleverly calls "The Commodordion," is almost entirely constructed from two C64 machines, 5.25-inch floppy disks, and gaffer tape. It's also a project that's been more than three years in the making.
Turning two C64s into a playable accordion is no easy task. In particular, Åkesson says he struggled with the bellows and went through a "number of failed attempts," one of which was inspired by fuel injection systems used in cars. While convoluted, he actually built a prototype, but it didn't respond to changes in air flow fast enough to articulate music.

"So I went to look for alternatives. While I was reading up on anemometers and propellers, I came to watch a YouTube video about renewable energy. A man was explaining something—I don't remember what it was, though I'm sure it was interesting—while standing next to a wind turbine, and he had to shout in order to make himself heard over the din. Some of that noise came from the machinery, but a lot of it was unmistakably from the wind hitting the microphone. I remember the 'aha' moment vividly: That's how I'm going to measure air flow!," Åkesson explains 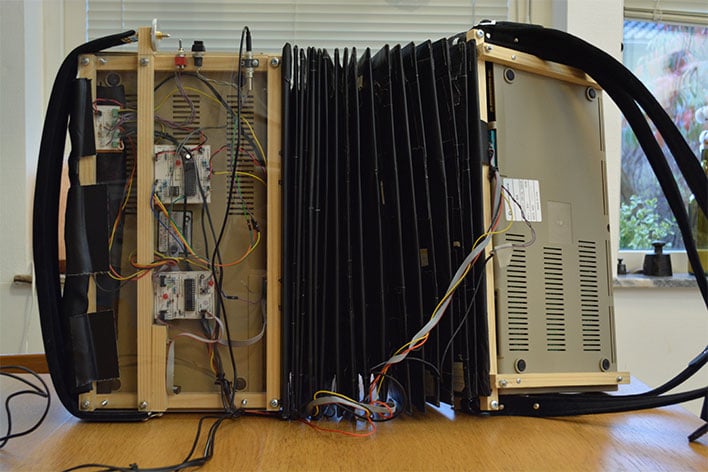 As for the actual bellows, they're made from floppy disks that he cut up and taped together in the appropriate shape, which is pretty fascinating in and of itself. To actually play the thing, he hammers out melodies with his left hand on one of the C64 keyboards while his right hand pounds the other keyboard to form chords and bass notes.
If the end result doesn't look ergonomic, that's because it isn't. Åkesson says the design "puts a lot of strain on the left wrist, arm, and shoulder," in part because most of the keys on the left keyboard are difficult to reach.
"As a musician I take ergonomics seriously (and so should you!), so unfortunately I won't be playing this instrument very often, and I most definitely won't practice for hours to improve my left-hand technique. This rather undermines the potential for the Commodordion as a viable musical instrument," Åkesson laments in his blog post.
That said, the right-hand side doesn't suffer the same ergonomic issues and may help drive the design of a future revision. Even as-is, however, this is one of the coolest musical PC mods I've seen since the Floppotron 3.0.