Starting in 2011, the Floppotron has delighted audiences with many a delightful symphony, the first of which we saw was a rendition of the Imperial March from Star Wars. In 2016 Floppotron 2.0 had to be introduced with a better version of the Imperial March. It has been retired after having played 128 songs since 2016. We took notice when it had a cover of Metallica's Enter Sandman. Floppotron 2.0's final song was, aptly, Con te partirò, which translates into "Time to Say Goodbye."

It's not all sad news of course, because Floppotron 3.0 has had some major upgrades compared to its older siblings. Those upgrades include better controllers, more power management, and even extra safety features. Introduced by the creator and playing its debut song, Entrance of the Gladiators by Juluis Fucik, the extensive list of upgrades is quite impressive.


Floppotron 3.0 now houses 512 floppy disks drives, laid out in an array that makes them almost look like a graphical equalizer. For comparison, the 2.0 only had 64 floppy drives at its reveal, so that's 448 more floppy drives! That's not all it has—there are also four flatbed scanners and 16 mechanical hard disk drives to provide a significant amount of orchestral completeness for some classic tech. In addition to the actual "instruments," there are two emergency stop buttons, resettable fuses for up to 8 floppy drives, and custom universal controllers that can handle playing up to 192 of the floppy drives at a time.

How does Floppotron 3.0 work though? Well, it's actually a midi device, it utilizes a USB to Midi Converter that passes through a MIDI-to-RS485 gateway which handles the signals the MIDI controller sends to it to tell the varying pieces of hardware to activate in certain ways and so, we get music! All of this is powered by an array of 16 modular 5V/18A power supplies and three 12V/8A power supplies. This creates a power consumption average of 300W, with a peak consumption at 1.2kW, making music apparently can be hefty on the power bill. 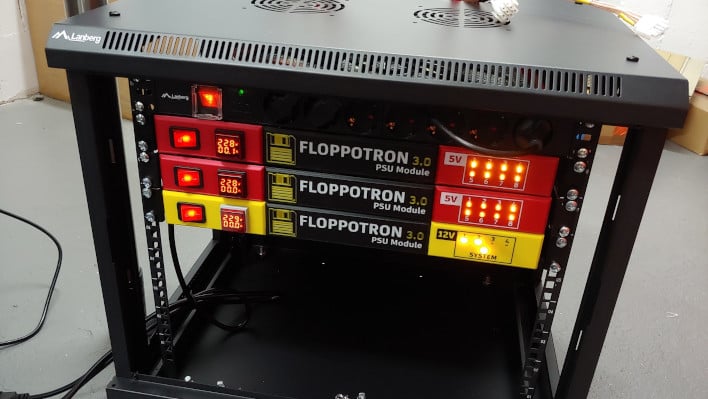 
If you want to check out the back log of Floppotron's 3.0's predecessors beautiful music, head to the main YouTube page. If you want additional details on how Floppotron 3.0 was made, you can find links in the YouTube video description with detailed information including additional photos.