Truth be told, it's harder than it looks to be witty on Twitter. Not everyone shares the same sense of humor, and you have to be careful not to cross any lines and say something stupid. So with that in mind, we're hesitant to give Electronic Arts too much grief over a recent tweet poking fun at single player games. We don't need to, because the internet at large is piling it on.
We happen to like single player games. Titles like Spider-Man on the PS4/PS5 (and soon on PC), Control on PC, The Legend of Zelda: Breath of the Wild for the Switch, and a whole bunch of others are a blast to play. You can toss in a in several EA titles too, like Star Wars Jedi: Fallen Order, Mass Effect: Legendary Edition, and even Plants vs. Zombies (from its PopCap acquisition).
Be that as it may, someone at EA probably wishes they could take this tweet back...

"They're a 10 but they only like playing single-player games," EA wrote on Twitter.
The tweet is a play on a recent meme called The Rating Game that spread like wildfire on TikTok (you can read more about it on Know Your Meme) and of course hopped over to Twitter. EA's social media team or person pounced, and while the tweet stands at over 22,500 Likes, it's getting blasted in the Twitter thread.
Part of the reason is that EA is a popular punching bag. It's one of only two companies that was twice voted "Worst Company in America" in a Consumerist poll (2012 and 2013). And to be fair, the internet is not exactly short on toxicity (hence why we're not getting any further Return to Monkey Island updates).
In this case, it was just an odd diss on EA's part, for multiple reasons. Single player games are popular, and EA doesn't ignore the category, as various tweets were quick to point out. Some reacted angrily, saying things like "How are your tweets worse than your games?," while others went more humorous routes (although the mean tweet is pretty funny too). 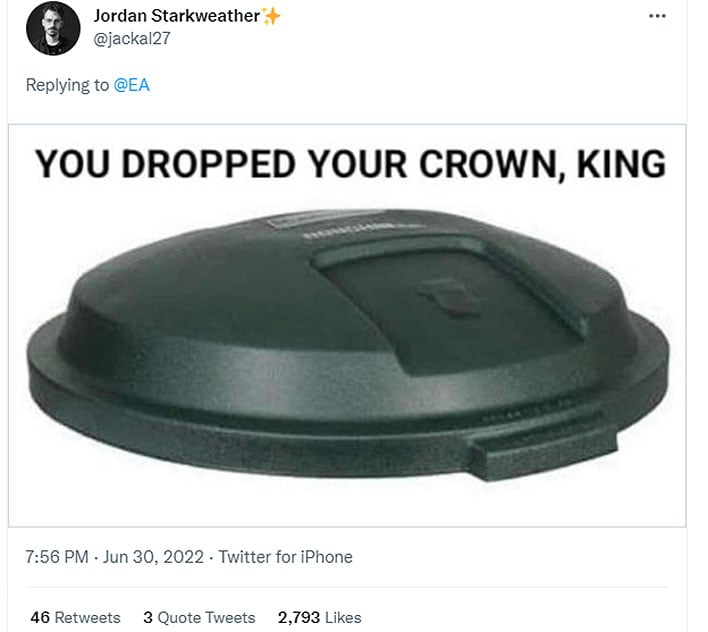 Others pointed the irony in posting the meme when EA is just months away from publishing its Dead Space remake, a single player survival horror game. And there are many calls to delete the tweet, though it still stands at the time of this writing.

To EA's credit, it took the criticism in stride. In a follow-up tweet, it said, "Roast well deserved. We'll take this L cause playing single player games actually makes them an 11."
Now if you'll excuse us, The Sims 4 is calling our name...