You'll have to pardon the editorial take on the hoopla surrounding Return to Monkey Island, the long awaited sequel spearhead by adventure gaming legend Ron Gilbert, but I have an emotionally vested interest in this game's release. Like many others who look back fondly on the heyday of point-n-click adventure games, I view the Monkey Island series through sacred-color glasses. Same goes for so many other classics from the era, mainly from Lucasfilm/LucasArts and Sierra (Space Quest, Maniac Mansion, Quest for Glory, Loom, and so forth). But with Return to Monkey Island, I'm both surprised and (cynically) not surprised that a controversy has arisen.
For anyone who has not been following, Gilbert created the first two titles in the series, The Secret of Monkey Island and Monkey Island 2: LeChuck's Revenge. After he left for different pastures, the series continued with several more installments, and eventually the IP transferred to Disney when it bought LucasFilm for $4 billion.
As time went on it seemed increasingly less likely that Gilbert would ever be involved in a Monkey Island game again. Then in a 2013 blog post he wrote, "The only way I would or could make another Monkey Island game is if I owned the IP." And just like that, it look like the door would be shut forever. Except, as it turns out, it wasn't.

Earlier this year on April 1, Gilbert teased a new installment. Most wrote it off as an April Fools' Day gag, but then a few days later he confirmed it was not a joke, linking to a teaser trailer on YouTube.
"A little something we've been working on for the past 2 years in complete secrecy," Gilbert wrote.
And just like that, fans like myself had reason to celebrate. At long last, Gilbert would be delivering another Monkey Island sequel, one that he spearheaded. I hadn't been this excited since Thimbleweed Park, and others shared that same sentiment. So how did things turn toxic?

The reaction to the trailer was a mix of excitement and criticism, some of it especially harsh, over the art style. This permeated social media and web forums, and Gilbert's own 'Grumpy Gamer' blog (his online alias). Then this past Tuesday, a gameplay reveal trailer dropped (shown above), kicking up a fresh storm of criticism.

To be fair (to the critics), not all of them are spewing with toxicity. Additionally, you need to have thick skin when posting anything to the internet. Not everyone is going to like what you post or what you've been working on, and that's fair. Also, Gilbert stated last month that he intentionally wanted the art style in Return to Monkey Island to be "provocative, shocking, and not what everyone was expecting." Mission accomplished, but he wasn't expecting the kind of backlash that would follow, not from diehard fans anyway.

"It's ironic that the people who don't want me to make the game I want to make are some of the hard core Monkey Island fans. And that is what makes me sad about all the comments. Return to Monkey Island is an incredible rollercoaster. Get on and have some fun or stomp out of the amusement park because it's not exactly the rollercoaster you wanted," Gilbert also stated at the time.
This all came to head yesterday when, in the comments section of a recent post on his blog, he essentially took a vow of silence regarding the game. He also deleted the long-running blog outright, prompting a community scolding on Twitter by Dominic Armato, the voice of Guybrush Threepwood. 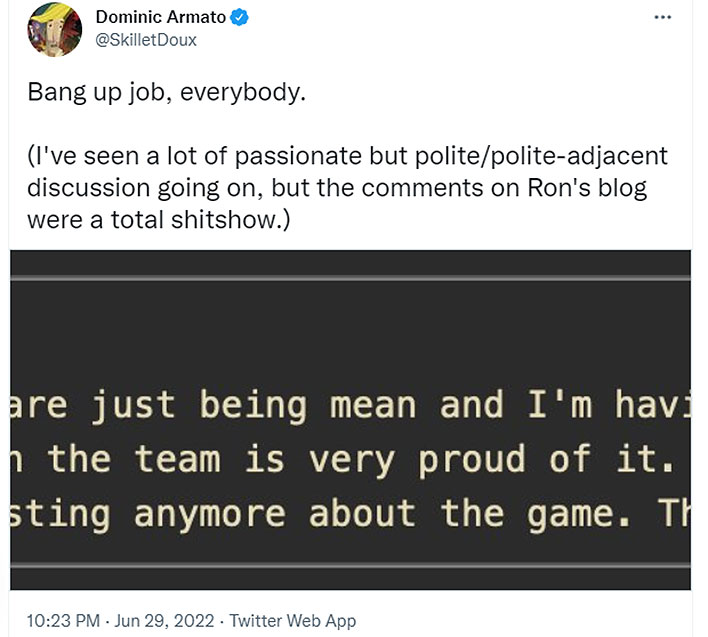 "I'm shutting down comments. People are just being mean and I'm having to delete personal attack comments. It's an amazing game and everyone on the team is very proud of it. Play it or don't play it but don't ruin it for everyone else. I won't be posting anymore about the game. The joy of sharing has been driven from me," Gilbert stated on his now-deleted blog.
Some of the comments that hadn't been deleted in a Wayback snapshot (archive) suggested the "game is going to fail so hard" because of its "awful art style," and that on one of the characters, "His nose looks like a c**k ffs, and the lifeless eyes." Another person stated, "Impressive how many people will pay for eye cancer these days."
The whole situation makes me incredibly sad, both for Gilbert and selfishly for myself. If the community can drive Gilbert to silence and drain his joy from a project like this, what are the chances he makes another game for old school adventure gaming fans? Or that other developers considering something similar go through with it? 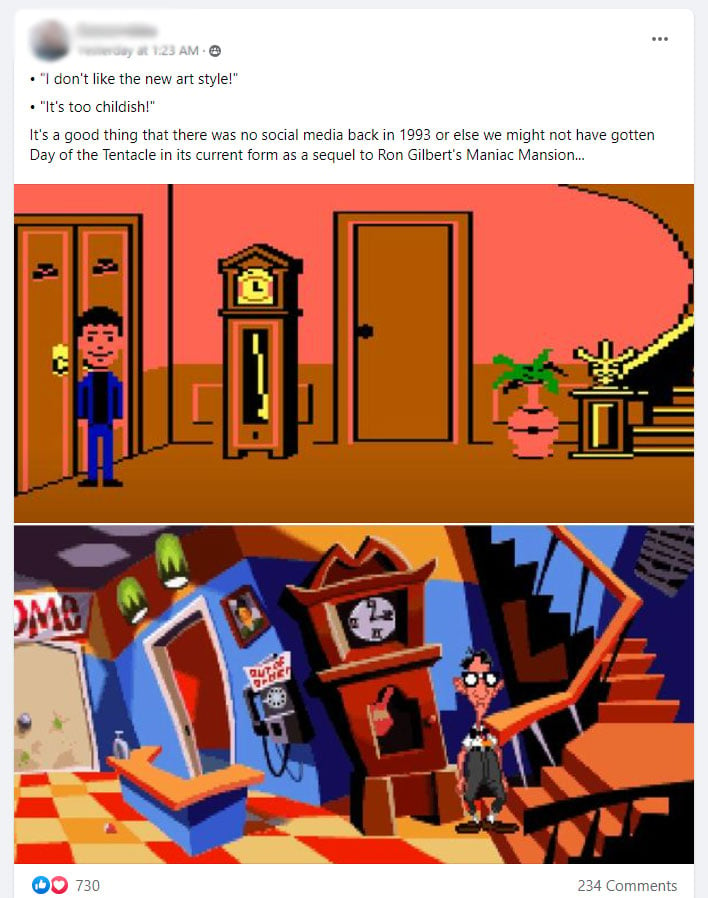 Indeed, the art style is decidedly different. But as someone in one of the retro groups I'm a part of on Facebook pointed out, it's a good thing the internet was much of a thing when Day of the Tentacle came out, because the art direction was a drastic departure from Maniac Mansion. Yet the sequel was a blast.

Here's hoping Return to Monkey Island will be a blast as well. Either way, Gilbert deserves better than some of the feedback he's been getting. That said, a lot of it has actually been positive. It's just unfortunate that the toxicity got loud enough to drown it all out.
Return to Monkey Island is on track to release sometime this year.