Playing Elden Ring On A PlayStation 5 Or PC? Download This Patch Now

It took a minute, but the annoying save bug in Elden Ring that was driving some PlayStation 5 players bonkers has been patched out with the latest 1.02.2 update. Bandai Namco shared the good news on Twitter, saying the patch is available now. It's a relatively small update, and a most welcome one that also brings with it some fixes for PC players as well.
According to the small list of release notes posted on Twitter, the 1.02.2 patch fixes three issues affecting PC players, including one that might help with stuttering. While not mentioned outright, Bandai Namco says the patch addresses a bug "where the graphics card was not being used, resulting in slow performance."
It also fixes a bug on PC that causes the game to quit under certain unspecified conditions during a battle with the Fire Giant, and vaguely address "other bugs."

Things seem to have gone a bit more smoothly on Xbox, which has seen fewer updates. That said, the previous 1.02.1 patch included a fix for online issues some Xbox users were having, such as receiving a "Network Status Check Failed" error message. That one also improved mouse operation for PC players who aren't interested in using a controller (good luck), and cut back on the number of files needed when entering a new area on the PS5.
The save bug had arguably been the most annoying for PS5 players, though. If the console lost power while playing Elden Ring or even went out in Rest Mode, players could lose their progress. The new 1.02.2 update makes changes to save game progression even when the game is not terminated, to avoid this from happening. 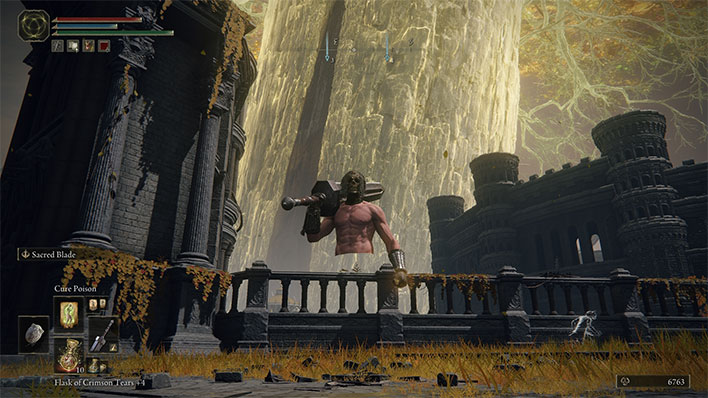 Somewhat hilariously (from the outside looking in, anyway), some players have reported some odd graphics anomalies after applying the patch. Twitter user @only1ne_, for example, posted the above screenshot noting that "equipped the Royal Remains Greaves makes your legs invisible" post patch.
If you are still experiencing stutters after applying the 1.02.2 patch, there are some steps you and try. Making sure your GPU drivers are up to date is the obvious one, though beyond that, there are other steps you can experiment with, one of which involves a Device Manager setting. See our list of simple of fixes for more info.