Over the weekend, EA held a Battlefield 2042 technical playtest on both PC and Xbox platforms for those who applied and got an invite. However, it appears that not everyone read the invitation closely as there were some rather stringent rules broken in the past 72-hour playtest period, leading some players to be banned from the EA test and potentially the game as a whole once it it released.


Battlefield 2042 is EA’s upcoming title in the long-running Battlefield series, wherein players will be taken 23 years in the future from now. The world is on the brink of war, and traditional society has collapsed, fragmenting people into groups of “No-Pats” or Non-Patriated people. Now, these people are being leveraged in proxy wars and must fight for their survival. 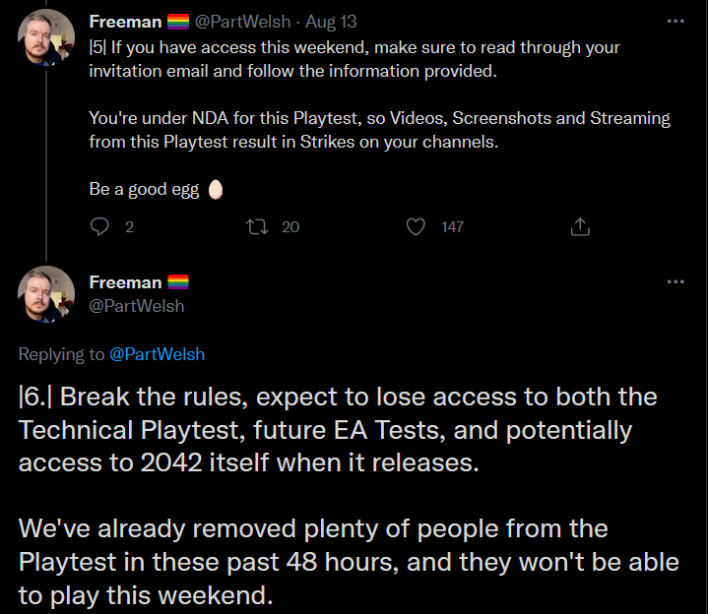 For those who are interested in the game, you may have been able to join a technical playtest this weekend but may not have read the terms and conditions all the way through. Lead community manager at EA @PartWelsh tweeted a reminder that the playtest comes with an NDA (Non-Disclosure Agreement) attached to it, and that “Videos, Screenshots and Streaming from this Playtest result in Strikes on your channels.” Furthermore, if you decide to share information, then you can “expect to lose access to both the Technical Playtest, future EA Tests, and potentially access to 2042 itself when it releases.”

Reportedly, many people have already been removed from the technical test, so EA is not messing around with this. However, this serves as a warning to anyone thinking about sharing BF2042 when the next test rolls around. Uploading some cool gaming footage on YouTube, Twitch, or elsewhere is most certainly not worth the repercussions that EA will be doling out to those who break the NDA.