Despite all the advancements made in computing, even today the printer can still an extreme source of frustration. Usually it's because the network refuses to recognize the darn thing, and sometimes it's because the printer obsesses over a low ink level and stubbornly refuses to print. But more recently, a bug in Windows 10 was causing blue screen of death (BSOD) errors when attempting to print documents. Fortunately, the issue has been resolved, if you know where to look.
The initial bug was introduced with this month's Patch Tuesday update, via KB5000802 and KB5000808. For some, these were automatically downloaded and applied to their Windows 10 PCs. However, some users quickly began complaining of BSOD errors when attempting to print. The issue affected different brands of printers, including Kyocera, Ricoh, Zebra, and others.
A temporary workaround was to uninstall the offending update, which could be accomplished through the Control Panel or by way of the command prompt. That's no longer necessary, as an optional patch for Microsoft's problematic patch is available.
Since it is an optional update, it will not be automatically downloaded. To grab it, first try going into Windows Update and hitting the Check for updates button. 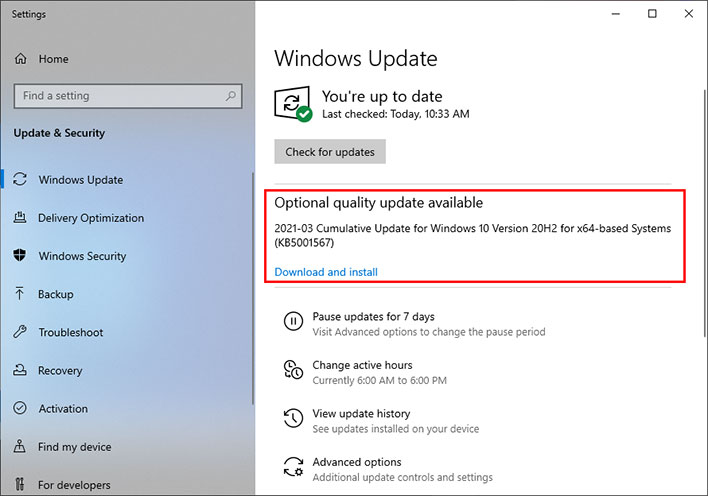 When it is finished, you should see an optional update available. On Windows 10 versions 2004 and 20H2 systems, this will be KB5001567. According to Microsoft's related support document, this "updates an issue that might cause a blue screen when you attempt to print to certain printers using some apps." So if you're having this issue (or worried you might), go ahead and grab it.
Alternatively, you can grab the optional update from Microsoft's Update Catalog to manually install it. There are different ones for different builds of Windows 10. Here they are...
Applying the appropriate update should resolve your printer issue, if you're having one. And if you're not getting BSODs when attempting to print, you can safely skip this optional update.