Doom Gets Hellish Minecraft Makeover With Doomed: Demons Of The Nether Project 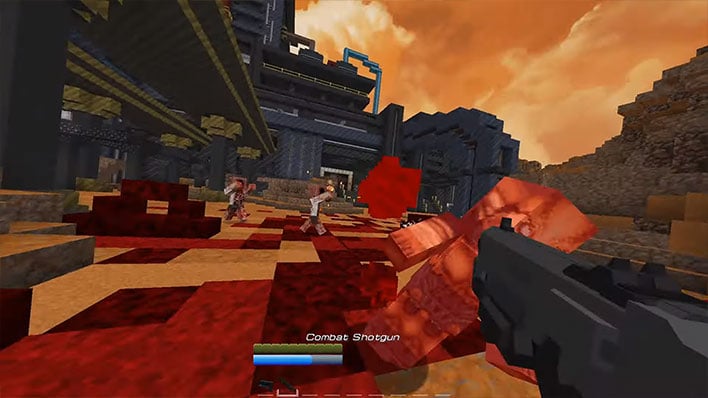 There is a new Doom game on the horizon! Okay, maybe not brand new, per se, but an ambitious fan is working on a new Doom experience called Doomed: Demons of the Nether, which brings hell to Minecraft (or Minecraft to hell). Just do not call it a mod, because as noted on the project's page, that is not what this is. So, what is it, then?
"Doomed uses no mods and relies on a resource pack and datapacks. which come with the save folder," the project page states.
Fair enough. Doomed: Demons of the Nether is also the brainchild of Sibogy, who uploaded a couple of gameplay demos to YouTube. There are also a bunch of shorter clips on their YouTube page that shows off different elements, like ammo crates, collectibles, the delightful chainsaw, explosive barrels, a possessed solider enemy, and various other bits.
Here is a look at the latest gameplay demo...

This takes place on a Minecraft Adventure map transformed into the hellish landscape on Mars, where demons are able to port in and run amuck. And it is based on Doom 2016 rather than the more recent Doom Eternal game. It is a single-player campaign and has been in development since March of this year. At this point, it is more than halfway finished.
Some of the key features include custom 3D models and programmed weapons and abilities, fast and fluid movement and combat, custom sound effects and music, boss fights, and thoughtfully designed fight arenas and levels, all of which are on display in the demos.
Here is a look at the first gameplay demo that was shared a few months ago...

This is a work in progress, and there are no downloadable and playable demos to try out just yet. Sibogy says that would entail releasing all of the game files and programming, which is understandable why they would not want to do that just yet.
In an update posted a month ago, Sibogy said Doomed: Demons of the Nether was 55 percent complete. Hopefully it will be finished by the end of the year, but either way, it looks to be worth the wait.