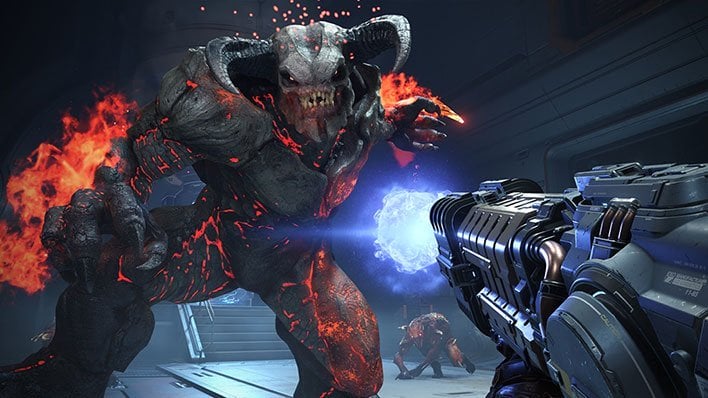 GameStop may have jumped the gun a bit yesterday by releasing DOOM Eternal a day early in its retail stores (in a bid to help stop the spread of COVID-19 according to a statement), but today is the game's "official" launch day. DOOM Eternal is highly anticipated, as it is the successor to the DOOM reboot that first hit the market in 2016.

In an effort to give gamers the best possible performance in DOOM Eternal, both NVIDIA and AMD have released new graphics drivers with specific optimizations for the game: GeForce Game Ready 442.74 WHQL and Radeon Adrenalin 2020 Edition 20.3.1 respectively. With regards to DOOM Eternal, NVIDIA states, "The new Game Ready Driver provides the latest performance optimizations, profiles, and bug fixes for DOOM Eternal."

According to NVIDIA, the only fixed issue in the new driver set involves a black screen that would occur when using Alt+Tab in Red Dead Redemption 2. However, there are still a number of known issues with the GeForce Game Ready 442.74 WHQL drivers:

AMD also adds that there is specific support now included for Half-Life: Alyx (which launches next week) and Ghost Recon Breakpoint (via the Vulkan API). There are also four new Vulkan extensions that have been added:

In addition to support for those three new games, AMD has also fixed a slew of bugs in its drivers:

There's also a [nearly as long] list of known issues that are found in Radeon Software Adrenalin 2020 Edition 20.3.1, which you can read here.

You can download the latest drivers from NVIDIA and AMD using the links below: