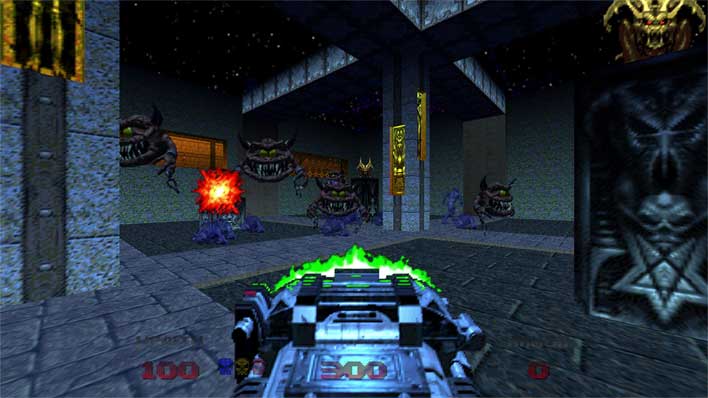 Fans of the Doom franchise will be happy to hear that a new chapter is being included in the upcoming Doom 64 re-release. The port is coming from developers Nightdive Studios, and it is reportedly being handled as a top-tier game by the devs. The atmosphere and story of Doom 64 will be expanded on in the new chapter.

Nightdive is the same studio that is behind the upcoming System Shock port. The same devs have released fan appreciated ports of other classic FPS titles like Turok, Foresaken, and Blood. Details on the coming Doom 64 port have been shared by the devs of the game, including dishing on what weapon they think is the best.

The devs say that the port will be capable of supporting frame rates of 60Hz and above, with the devs saying that players can choose to run the game at 120 fps or above 1000 fps if they want. Visuals are interpolated to run as smoothly as possible, and sprites are rendered in a manner more true to how the original rendered them.

The devs did fix a few bugs that were present in the original release of the game. Those include a check to prevent spechits overflow and checks to prevent Lost Souls from being ejected out of a level when Pain Elementals explode. As for the new chapter of the game, it takes place after the original Doom 64 campaign ends. In that new chapter, the Mother Demon that the player just defeated has a sister. The sister tries to send the player away, and those who can make it back can fight her and get rewarded with some lore they say fans should enjoy.

Testers have said that the game feels very much like the original doom, according to the devs. Notable improvements from the original include a reduction of input lag and more fluid movement overall. As for the better weapon between the Unmaker and the BFG9000, the devs are split with one liking the Unmaker, assuming it's unlocked with all the keys, and others preferring the BFG9000. The Unmaker is unlockable in the port after the player completes all Slayer Gates. Fans of Doom who preordered Doom Eternal last year were given Doom 64 as a preorder bonus.