Did you know you can play PC games on Linux? And not just games with Linux-native versions, either. Sure, Wine's been around for nearly three decades, but it's Valve's Proton that has been making the most significant progress lately. By combining DXVK, the aforementioned Wine, and a bundle of its own code, Proton lets Linux gamers enjoy Windows titles on their open-source operating system of choice.

The latest update, version 6.3-8, adds game-specific support for 24 new titles, including Age of Empires 4, Deathloop, GreedFall, Mass Effect Legendary Edition, and Marvel's Guardians of the Galaxy—although the last title only works on AMD GPUs, for now. It also fixed bugs in a bunch of other games, like Baldur's Gate 3, Assassin's Creed Odyssey, Deep Rock Galactic, and Cyberpunk 2077, just to name a few. 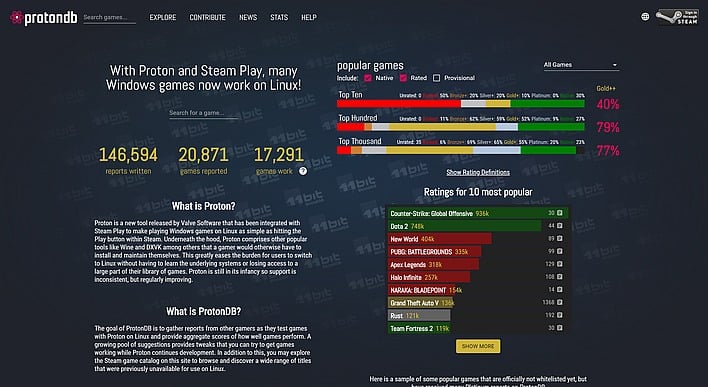 Also noteworthy is support for NVIDIA's DLSS. A number of DirectX 11- and DirectX 12-based games that include DLSS upscaling are already supported by Proton, but enabling DLSS could have unpredictable results. Now, enabling DLSS should work just fine; if it doesn't, you should report that to Valve on Github. Of course, one major reason for all the recent refinements to Proton is the imminent launch of Valve's Steam Deck handheld, and naturally, DLSS is not going to work on the AMD-powered portable console.

Likely even more notable in this release is preliminary support for BattlEye anti-cheat. BattlEye has always supported Linux, and the company announced back in September that it would work with Valve to enable support within Proton. Created originally as a game-specific third-party anti-cheat tool for Battlefield: Vietnam in 2004, BattleEye has grown to be the anti-cheat mechanism of choice for a fair few popular games, including Fortnite, Destiny 2, ARMA III, PUBG, and more.

No DLSS, but at least you can play Fortnite on the go.


Unfortunately for Linux gamers, developers have to opt-in to allow BattlEye to function on Proton for their games individually; by default, BattlEye will not validate players running in Proton. Currently, Valve only mentions two games: Mount & Blade II: Bannerlord, and ARK: Survival Evolved. The company does say that it expects more games to follow, though. We'd certainly expect as much if the Steam Deck gains in popularity.

If you're a fellow PC gamer disgruntled with Windows 11 and looking to make the jump to Linux, head on over to ProtonDB where you can see and search compatibility ratings for your Steam games. Alternatively, if you'd like to read the full patch notes for Proton 6.3-8, you can find them on GitHub.