DJI is eking out one last model release before the year is over, the more affordable, ultra-light DJI Mini 3. It's similar to in many ways to the DJI Mini 3 Pro, yet comes with a few big differences.

Designed from the get-go to be under the 250g threshold set by drone regulations in much of the world, the DJI Mini 3 is the latest compact quadcopter added to the company's lineup. Ferdinand Wolf, Creative Director at DJI expounds that the Mini 3 “...follows in the footsteps of its sibling, Mini 3 Pro, and offers many of the same high-performance features as a worthy alternative option.”

So what similarities do the two share? Besides weighing just under 250g respectively, the big one for most is the camera sensor package. The unit on the Mini 3 can shoot video and images vertically (where the gyro-stabilized gimbal can rotate 90-degrees upwards), capture videos at 4K/30fps (the Pro can shoot at 60fps), 2.7K and full HD at 60fps. Flight time is rated at 38 minutes (standard pack) or 51 minutes (extended Intelligent Flight Battery Plus), but in the real world, one should expect about 15% less than the factory claim. The Mini 3 can also be purchased with DJI's fantastic RC controller, which takes the reliance away from using a smartphone and the standard issue RC-N1 controller. 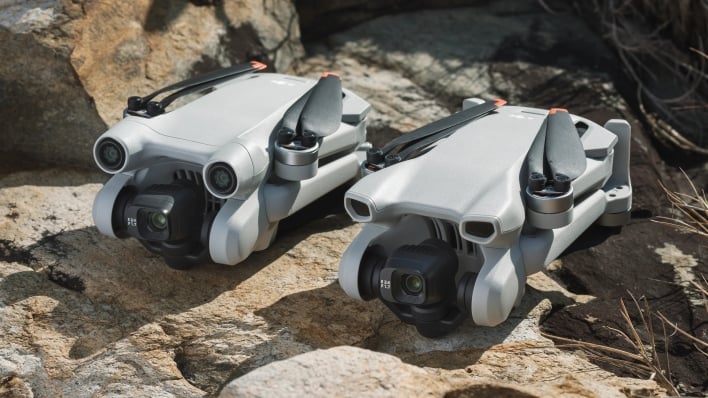 Now, the biggest differences between the DJI Mini 3 and Mini 3 Pro are the price, as well as the omissions of crash avoidance and ActiveTrack. The $470 starting price is actually cheaper than the DJI Mini 2 on launch day, although this is for the drone only. Adding a controller bumps the price up to $560 (more pricing details below).

Like the Mini 2, Mini 3 pilots have to be extra-aware of surroundings with the loss of forward- and rear-facing obstacle sensors. It requires greater attention while flying, which is a good thing, but also limits the filming possibilities in tighter or more confined spaces.

Another feature that's been dropped is ActiveTrack, which intelligently follows a chosen subject throughout the shot. While the Mini 3 has other intelligent shooting modes collectively called QuickShots, like Dronie and Circle, it seems like it uses a more rudimentary tracking algorithm which relies on the drone's optics and the remote itself.

The DJI Mini 3 is available now starting at $470 for the drone alone. $560 adds RC-N1 controller. If you want the DJI RC controller instead, it's $700. The Fly More RC-N1 package (adding a shoulder bag, a two-way charging hub, two extra Intelligent Flight batteries) retails for $718. The same Fly More combo with the DJI RC will set you back $858.