Drone maker DJI may not have many surprises to reveal when it gets around to announcing its upcoming Mavic 3 Pro. That's because multiple leakers have published a flurry of information covering just about everything there is to cover, including the specifications, special features and upgrades, and even the pricing.
It has been more than three years since DJI released the Mavic 2 Pro, though it has launched more recent models like the Mavic Air 2 we reviewed last year, and the Mavic Air 2S, among others. The Mavic 3 Pro will take its place as DJI's flagship consumer drone, and it will buzz onto the scene with two cameras instead of one.
The two cameras include a 24mm wide-angle Four Thirds lens with an 84-degree field of view, f/2.8 to f/11 aperture, 1mm focus, and 20 megapixels, while the other is a 160mm 1/2-inch telephoto sensor with a 15-degree field of view, f/4.4 aperture, 3m focus, and 12 megapixels.
For photos, the wide-angle camera has an ISO range of 100 -3200 (automatic) or 100-12800 (manual), and 100-6400 for video. The telephoto lens, meanwhile, has an ISO range of 100-3200 for both photos and videos, according to the leaked documents. Both are capable of 5.2K video recording. 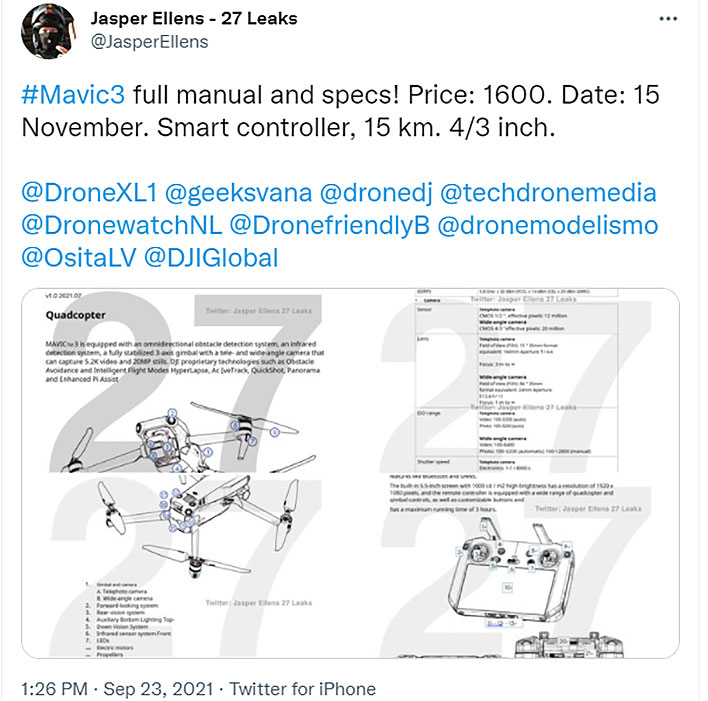 Twitter user @JasperEllens posted a bunch of documents and details with sketches of the drone and the accompanying smart controller. There are actually going to be two versions spread across three packages or SKUs, assuming the leaked info is correct—a regular Mavic 3 (it's referenced as both Mavic 3 and Mavic 3 Pro) priced at $1,599, and an upgraded "Cine" version with an integrated solid state drive and a bundled 1Gbps data cable. It also comes with the new smart controller.

There's no mention of pricing on the Cine model, though it's been suggested DJI could price it $1,000 higher. That seems plausible to us, given that the smart controller alone is a pricey item (the current controller is a $750 part), plus the inclusion of SSD storage.
Here's a look at the three SKUs and how they compare... 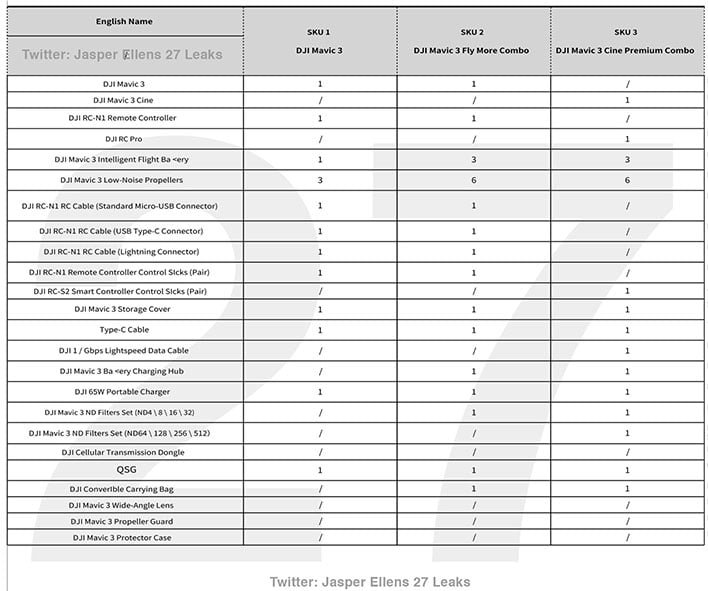 Compared to the Mavic 2 Pro, the Mavic 3 lineup will be just a tad heavier, checking in at 920 grams (versus 907 grams). You can probably add a few more grams for the Cine package, due to the SSD that's tucked inside. Essentially, though, we're looking at them weighing about the same as the previous generation, as a 13-gram increase is pretty negligible at that weight class.
The Mavic 3 is rated to fly at up 15.5 miles per hour when there is not wind blowing against it (so expect a little below that in real-world conditions). As for the flight time, it's rated at 46 minutes.
As for the controller, it features "the latest version of DJI's proprietary OCUSYNCTM image transmission technology, and can transmit real-time HD video from the quadcopter camera up to a distance of 15km." It also boasts a 5.5-inch screen with 1920x1080 resolution and 1,000 nits brightness. Maximum run time is rated at 3 hours.
An official announcement shouldn't be too far off, as it's said the drones will arrive on November 15.