Diablo Immortal Reveals Itself As A Microtransaction Money Grab

Blizzard made a lot gamers happy when it released Diablo Immortal on mobile (Android and iOS) a day early. Not that it would have been a huge deal to wait one more day, but little moves like that can build up goodwill with a fan base. Unfortunately for Blizzard, it's erasing some of that goodwill with backlash over microtransactions.
You'd be hard pressed to find a high profile free-to-play mobile game that doesn't have an in-game economy of some sort. Even on PC this can be a lucrative approach—just look at Fortnite for an example. But where Blizzard finds itself under increased scrutiny is how things turned out versus what Diablo Immortal game director Wyatt Cheng posted on Reddit four months ago.
In his post, Cheng said a "reality check is warranted" on the pre-release backlash that was being levied at the game several months ago.
"Almost all of the 'facts' presented in this post are fabricated. In Diablo Immortal, there is no way to acquire or rank up gear using money. There is no 50/50 system on rank upgrade," Cheng said. "The links cited don't link to proof of the assertions at all. You can choose from a variety of skin tones, including black, during character creation."
He went on to say that he encourages users to form their own opinions on the game once it launches, noting that he and his team have "poured years of bloody sweat into making" the title. "If you're curious about the microtransactions in the game, factual information is available elsewhere or you can check the game out (for free) when the game comes out," he added. 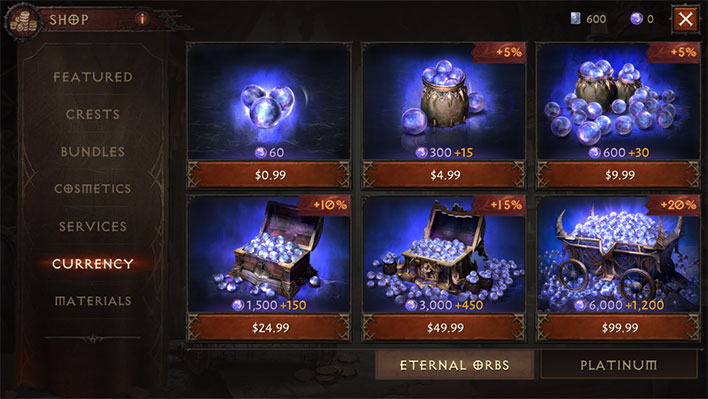 Well, it's out now, and it didn't take long for gamers to declare on Reddit, "Boy, that did not age well...," in reference to Cheng's earlier comments. A user on Twitter asked Cheng about this, saying he felt the original post from four months ago was "disingenuous and disappointing" to Blizzard fans over what feels like a technicality.
Here's the deal—you can't directly buy weapons and power ups in Diablo Immortal, but the cause of consternation comes down to the game's Legendary Crests. These give players Legendary Gems rated from one to five stars, which are then used to upgrade characters.
At issue is that players can only obtain three Legendary Crests per month, which works out to 36 per year. And it's never guaranteed you'll get a five-star gem, obviously. Players have complained that five-star Legendary Gems are exceptionally rare. To drive the point home, Twitch streamer Quin69 spent almost $4,000 on Diablo Immortal and still never obtained a five-star Legendary Gem.
Cheng's response? In a nutshell, he should have been more clear about the situation.
"Hey Ziz, I have been pretty up front in many interviews (though apparently not in this post) that gear was the 12 item slots. In many interviews I also clearly state that money can advance gems and legendary gems. I’m sorry this wasn’t clear here," Cheng stated on Twitter.
YouTube channel Bellular News crunched some numbers and claims it would take $110,000 in Diablo Immortal's current economy to fully max out a character, or 10 years of play time without spending anything. Neither of those sound like appealing propositions.