Much has been written recently about the supposed death of the "High-End Desktop" (HEDT) concept. The OG "HEDT" systems back in the day were probably dual-socket Pentium Pro rigs used by hardcore enthusiasts who simply wanted the fastest PCs possible. In more recent times, "HEDT" typically referred to systems based on platforms that shared more in common with server hardware than typical desktop machines, like the Cascade Lake-X Core i9-10980XE.


It's true that HEDT as a concept hasn't been a primary focus in the consumer DIY market this generation, but those platforms continue to live on where they originated: in the workstation market. Indeed, Threadripper's not dead. One case in point is the new Precision 7865 workstations announced by Dell today, which come strapped with AMD Ryzen Threadripper PRO WX-series CPUs sporting between 12 and 64 Zen 3 cores in a single socket. 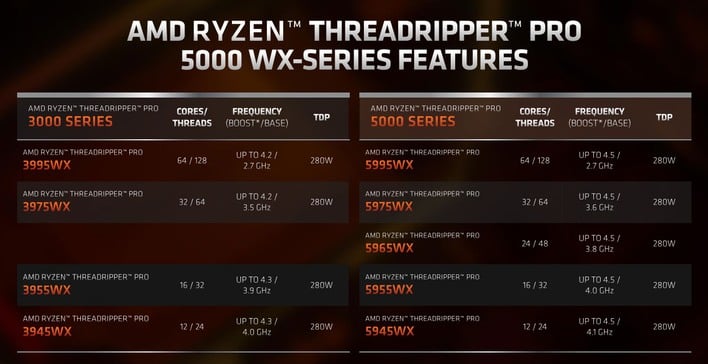 Make no mistake; these are real workstation systems. You get a giant CPU with a 280W TDP, eight RDIMM slots supporting up to 1TB of ECC DDR4 memory running at 3200 MT/s, and your choice of graphics cards ranging from the baseline NVIDIA T400 all the way up to the 32GB AMD Radeon Pro W6800 or the 48GB NVIDIA RTX A6000.


Storage options include almost whatever you want. You can have Dell ship you the machine with a single 2.5" 500GB hard drive, if you want, or you can outfit it with RAID controllers and PCIe SSDs for up to 56 TB of local storage. A discrete TPM is included, too, so you don't have to worry about any weird AMD fTPM issues.

External connectivity on the Precision 7865 is reasonably robust. Around back, there's a single 3.5mm audio jack, a pair of RJ-45 connections for the 1-Gbps and 10-Gbps Ethernet connections, and then six USB ports. The triple Type-Cs are 10 Gbps-rated, while the Type-A ports are 5 Gbps connections. You also get an old-school DB9 serial port and optionally, a pair of PS/2 connections for mouse and keyboard.

The front panel I/O is only slightly less impressive. Another pair of 10 Gbps USB Type-C ports and another pair of 5 Gbps USB Type-A ports are present, but you also get an SD card reader, another 3.5mm combo audio jack, and then whatever you put in the two locking drive bays. There's also a tiny space for an optional 9mm optical drive that supports DVD±RW recording at up to 8x speed.

Unfortunately, today's just the product announcement; the Precision 7865 isn't quite ready for prime-time yet. Dell says it will be ready this summer, though, and that it'll be available worldwide. Naturally, pricing will have to wait until the actual product premiere, so keep an eye out if you need a monster workstation.