Huge Deal: How To Get Amazon's Echo Dot 3rd Gen For Just 99 Cents

Amazon is practically giving away its Echo Dot 3rd Gen smart speaker with Alexa integration right now. Sort of, anyway. If you sign up for an Amazon Music Unlimited subscription, you can tack on the Echo Dot speaker for a mere $0.99. That's $39 below the speaker's MSRP (though current street pricing is around $20).
To take advantage of the deal, just head to the Amazon Music Unlimited + Echo Dot bundle page and add it to your cart. After the first month, your music subscription will automatically renew for $9.99 per month, or $7.99 per month if you're an Amazon Prime member. Pretty much the going rate for individual streaming music plans these days.
The Echo Dot is a sweet perk that integrates well with Amazon Music. Same goes for other smart home features—it's voice controlled with Alexa support, so you can have it dim the lights (if you're using smart lighting), look up the weather, make phone calls, and so forth.
Not feeling the Amazon Music Unlimited requirement? That's okay, as there are deals on other smart speakers too. Nothing as low as $0.99, but still below MSRP.

Save Big On These Amazon Echo Speaker Deals 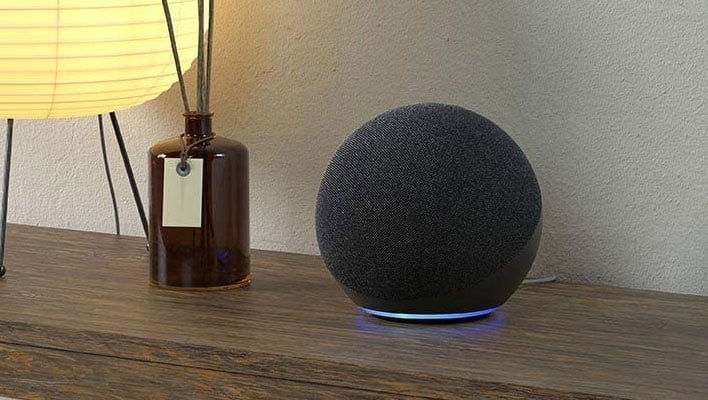 If you're in the market for a standalone smart speaker, the Echo 4th Gen with Alexa is on sale for $59.99 at Amazon (save $40). This is quite literally well-rounded speaker, powered by a 3-inch woofer and dual front-firing 8-inch tweeters. For comparison, the Echo Dot 3rd Gen is outfitted with a single 1.6-inch speaker.
It also features a 3.5mm line-in/out jack, just as the Echo Dot 3rd and 4th Gen speakers do, but adds Dolby Audio and built-in Zigbee support to the mix.
Here are some other Echo deals...
'Tis the season of savings, so be sure to bookmark us here at HotHardware and check back daily—we'll be tracking deals as they emerge, in addition to our usual coverage of news, reviews, how-to guides, and more.