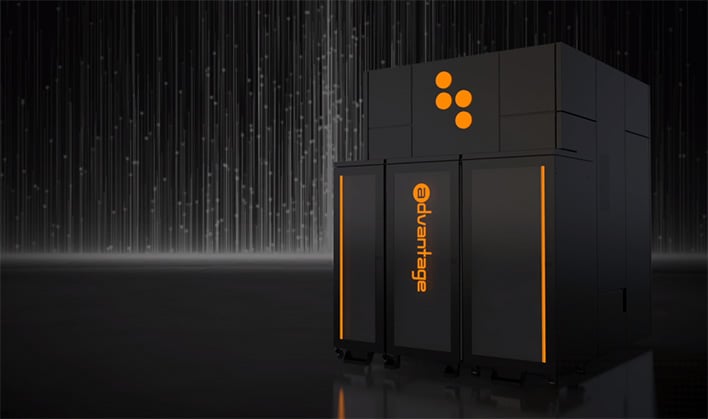 Every so often, Google and IBM like to flex their developments in quantum computing (Google last year claimed it had achieved quantum supremacy), a highly complex way of crunching data to potentially solve problems much faster than classical computing. But they are not the only players. Enter a company called D-Wave, which claims its new Advantage platform is the most powerful quantum computer in the world, and ready for businesses to use.
According to D-Wave, it system contains more than 5,000 qubits and 15-way qubit connectivity, along with a "hybrid solver service that can run problems with up to one million variables," or up to 20,000 variables on "dense problems."
I'm not sure how exactly to put that into context, only that it seems like a sufficient amount to figure out how my Boston Celtics lost a seven game series to the Miami Heat. Or what happened to the Red Sox this season. But I digress.
All those qubits are ready for businesses to harness in D-Wave's Leap quantum cloud service, should they desire.
"The combination of the computing power of Advantage and the scale to address real-world problems with the hybrid solver service in Leap enables businesses to run performant, real-time, hybrid quantum applications for the first time," D-Wave explains.
Designed to offer new solutions for large-scale business critical problems, there is some impressive hardware packed into the Advantage platform. Such as more than 1 million Josephson junctions (a quantum mechanical device comprised of a two superconducting electrodes on either side of a thin non-superconductive barrier), and a "football field of superconductive wiring." For reference, a football field is 100 yards long from one goal line to the other (or 120 yards if counting the end zones).
Advantage has a few high profile customers already, including protein design pioneer Menten AI, Western Canadian grocery retailer Save-On-Foods, global professional services company Accenture, and the German automaker Volkswagen.
There are certain types of problems Advantage is useful for, rather than everything under the sun. Volkswagen, for example, has leveraged D-Wave's quantum computing capabilities to streamline its automobile painting, in part to figure out how best to optimize the order in which its automobiles are painted.
Save-On-Foods, meanwhile, has used hybrid quantum algorithms to optimize its stores, claiming it was able to reduce an unspecified task from 25 hours to just 2 minutes of calculations each week.
Google, IBM, you're up to bat.