Late last year and early this year, gamers have been faced with a minimal stock of consoles and computer components. This in part due to extremely high demand, bots, and scalpers trying to get their hands on tech. It seems that the scalpers have gotten crafty in recent months, as some were able to buy PlayStation 5s before they were even available to the public at U.K. retailer Argos. This is incredibly disappointing for legitimate console buyers and a warning to retailers to harden their defenses against scalping.

Earlier today, U.K. gamers saw the PS5 in stock at Argos for an incredibly brief period, which is par for the course these days. Furthermore, the retailer's app and the website were crashing, glitching, and generally slow. To add further insult to injury, there was supposedly less stock than what was expected for the brief sale. Anonymous sources to IGN confirmed that this was due to individuals who ordered PS5 consoles from Argos yesterday. 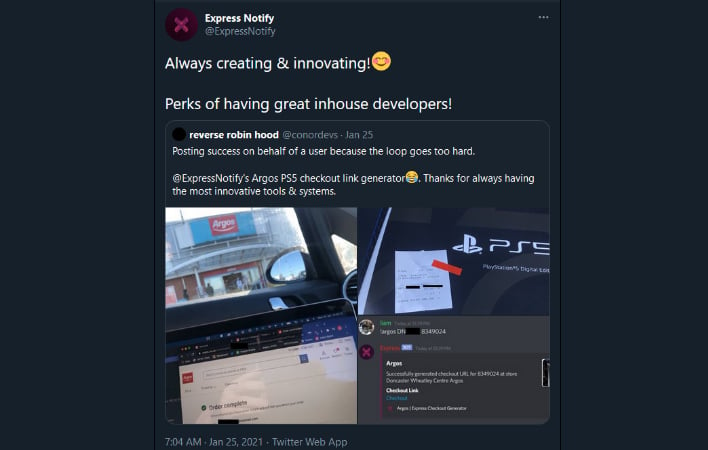 This happened because a loophole was discovered by the scalping group Express Notify, a paid-for Discord server that costs £35 (~$48) a month. The Discord shared links internally, allowing people to buy a PS5 before the general population could. They were even brazen enough to publicly take credit for the sins against gamers. It seems the loophole has since been closed, but several people were sadly able to get a PS5 using the links.


As an example, you agree not to use the Service in order to:
These rules of use are not meant to be exhaustive, and we reserve the right to determine what conduct we consider to be a violation of the Terms, Community Guidelines or improper use of the Service and to take action including termination of your Account and exclusion from further participation in the Service.

Ultimately, Discord should take action on groups like these as they are harmful to commerce and other Discord members trying to get what they want legitimately. Moreover, websites need to be aware that there are now groups out there that will do nearly anything to get people a console or computer component. It is incredibly disappointing to see this happening, but hopefully, this will happen less in the future as a spotlight is placed on the issue.