Could The Nintendo Switch Be Poised For Its First-Ever Official Price Cut?

The $299 Nintendo Switch has been on the market for well over four years, and during that time, it hasn't received an official price cut. However, to Nintendo's credit, it launched the Switch Lite in July 2019 as a lower-cost alternative at just $199.

However, a new report suggests that the standard Switch could be in for a price cut ahead of the launch of the Switch OLED. The Switch OLED features a slightly larger display (7 inches versus 6.2 inches), OLED display technology (of course), and a more robust kickstand. The console's other specs remain the same except for a somewhat heavier chassis and a revised dock. 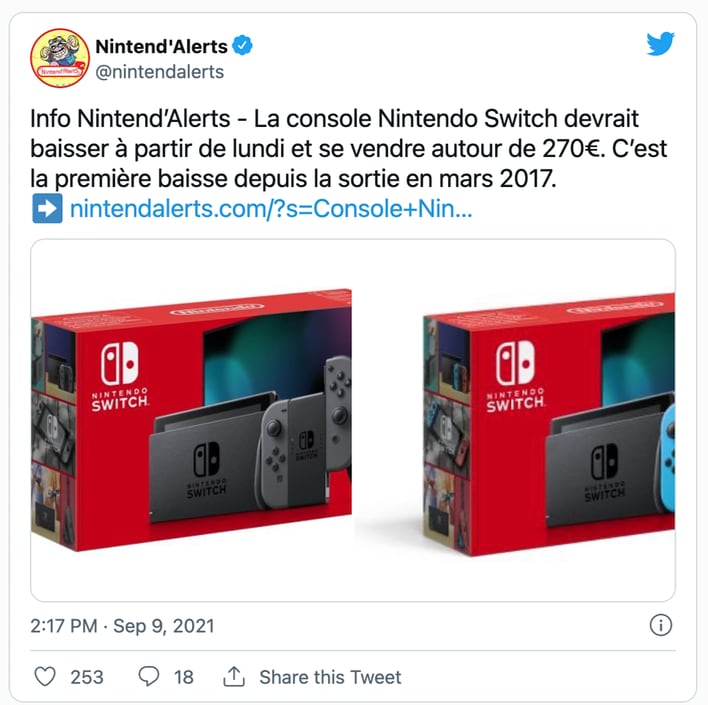 The Switch OLED costs $349, just $50 more than the standard model. Nintend'Alerts, a Twitter account that reportedly has been a reliable purveyor or Nintendo news, claims that the Switch will drop in price from €329 to €270 in France next week. If such a price cut were to take place in the United States, that could see the original Switch fall from $299 to $249. Of course, this is all just a rumor at this point, so we'll have to take this information with a healthy dose of salt.

There could be several things going on here if these pricing rumors are true. First, it could just be a temporary price cut ahead of the holiday shopping rush. It could also be a permanent price cut to further distance the Switch from the higher-end Switch OLED. On the other hand, Nintendo could potentially be angling to have a fire sale on the original Switch to clear out inventory and maintain a two-console family (Switch Lite and Switch OLED).

Whatever the case, Nintend'Alerts alleges that the new price cuts will go into effect next week. Whether those cuts actually materialize (and whether they'll show up here in the U.S.) remains to be seen.

As for the Switch OLED, Nintendo says that the console will ship on October 8th. Unfortunately, preorders for the console have already sold out at various retailers, so grabbing one this holiday season is likely going to be extremely difficult, especially with the ongoing chip shortage.