One of the few areas Corsair has not dabbled in so far is laptops. It has now rectified that with the launch of its Voyager a1600, the company's very first branded laptop design with a host of features for gamers, streamers, and creators alike. It's also notable for going all-in with AMD hardware, and for sporting an integrated touch bar powered by Elgato Stream Deck software.
Let's talk about that latter feature for a moment. Apple also tried to popularize touch bar controls on a laptop starting with the 2016 MacBook Pro, but ultimately moved away from what on hindsight feels like a halfhearted effort. So why is Corsair going in that direction with its introductory laptop design? Because game streaming has never been more popular, and this is a way for the Voyager a1600 to stand out from the crowd. 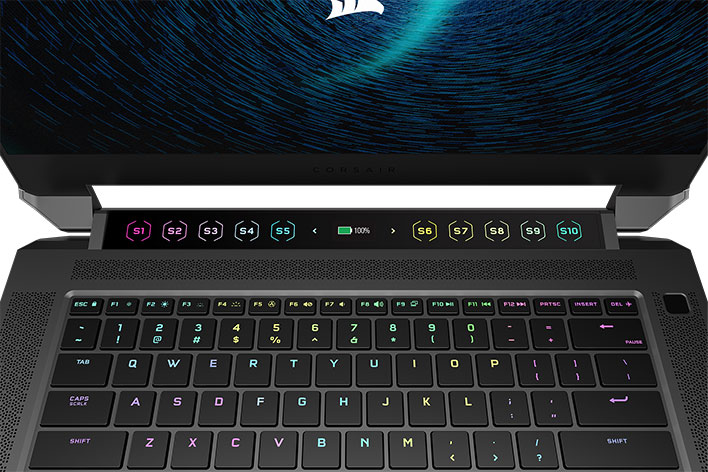 "We knew we had to bring something new and different to the table," said Matthew Hsu, SVP & GM, System BU at Corsair. "With our unique position in the industry, we were able to pull from the best of what Corsair has to offer—from award-winning components to extensive software integration—to create a laptop that no one else can."
You can think of its as a sort of integrated Stream Deck with 10 customizable shortcut buttons and arrow controls. They can be used for practically anything, but Corsair included it specifically with game streamers in mind. The same is true of the laptop as a whole.

Touch bar aside, the Voyager a1600 taps AMD's Zen 3+ CPU and RDNA 2 GPU architectures. There are two models, one with a Ryzen 7 6800HS CPU, 32GB of Corsair Vengeance DDR5 RAM, and 1TB NVMe SSD, and the other with a Ryzen 9 6900HS, 64GB of RAM, and a 2TB SSD. Both models sport a Radeon RX 6800M mobile GPU.
"We are extremely excited to partner with Corsair to launch the first Voyager laptop exclusively with AMD Advantage design framework," said Frank Azor, chief architect of Gaming Solutions at AMD. "The Corsair Voyager a1600 is the first truly mobile streaming solution; coupled with AMD smart technologies like SmartShift MAX, users can automatically unleash the full potential of this laptop whether gaming, streaming, or creating."


Everything else from top to bottom is the same as well, including a 16-inch display with a 2560x1600 resolution (16:10 aspect ratio), 240Hz refresh rate, FreeSync support, and an integrated MUX switch; Full HD 1080p webcam with a four-array microphone; full-size keyboard with Cherry MX ultra-low profile mechanical key switches and per key RGB lighting; and a 6410 mAh battery.
Wireless connectivity consists of Wi-Fi 6E and Bluetooth 5.2. Then for the external I/O, you're looking at the Thunderbolt 3-enabled USB4 ports, a USB 3.2 Gen 2 Type-C port, a USB 3.2 Gen 1 Type-A port, 3.5mm combo audio jack, and an SD memory card reader.
Corsair didn't say when the Voyager a1600 will be available, but did reveal pricing—the Ryzen 7 6800HS will cost $2,699.99 and the Ryzen 9 6900HS configuration will run $2,999.99.