If we had a nickel for every time an Alder Lake processor appeared in a leaked benchmark run, we'd have a lot of nickels. We're not sure exactly how many, but probably enough to weigh our pockets down, at least. Adding to the pile is yet another set of benchmark results, this time with the unreleased Core i7-12700 appearing on Geekbench.
The fresher the leak, the more interesting the data. Well, potentially—as we get closer to launch, the leaks should be more indicative of finalized hardware on updated platforms, and paint a more accurate picture of performance. We still should be cautious about reading too much into things, but current leaks are generally more interesting than ones that occurred several months ago.
That said, the Core i7-12700 poked its head on Geekbench this week, in an unspecified motherboard with 32GB of RAM, on a system running Windows 10 Pro 64-bit. Have a look... 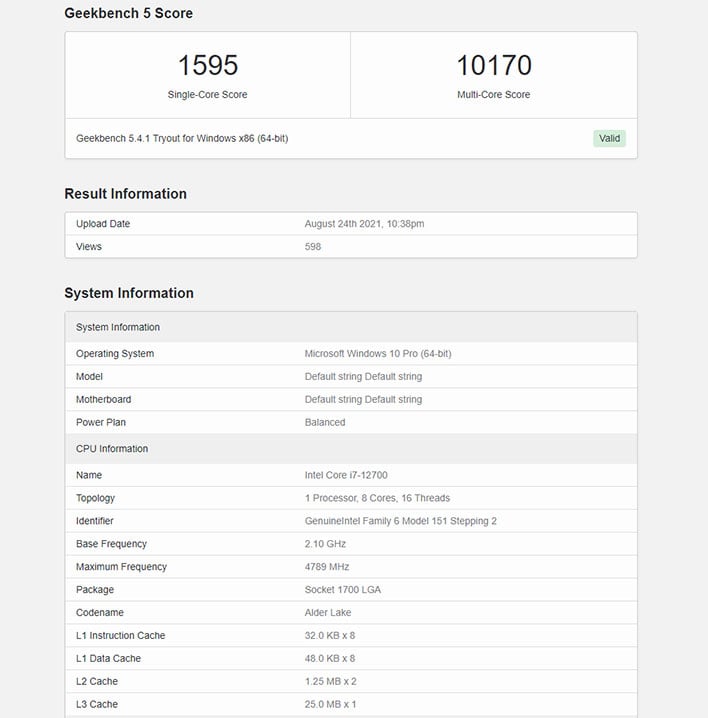 If Geekbench is accurately identifying the specifications, then the Core i7-12700 wields eight Golden Cove performance cores with Hyper Threading support, and dispatches with any Gracemont efficiency cores. So it is an 8-core/16-thread configuration, as opposed to the "K" variant (Core i7-12700K), which is believed to wield eight Golden Cove cores and four Gracemont cores, for a 12-core/20-thread configuration.
Looking at the performance, the Core i7-12700 posted a 1,595 single-core score and 10,170 multi-core score. At this still early stage, that puts it within striking distance of AMD's Ryzen 7 5800X, which also boasts eight cores and 16 threads.
How close? According to Geekbench's roundup of average scores, the Ryzen 7 5800X generally hits 1,692 in single-threaded testing and 10,376 in multi-threaded testing. That puts it ahead of the Core i7-12700 by 6 percent in the former and just 2 percent in the latter.
There are a couple of ways you can look at this. One is that while the Core i7-12700 is nipping at the heels of the Ryzen 7 5800X, it's not bringing the boom and leaving it in the dust. It's actually trailing it by a smidge, and the Ryzen 7 5800X has been out since November of last year.
We're of the viewpoint that this a relatively strong showing, though. Why? For one, Zen 3 is no slouch, and the Core i7-12700 isn't getting left in the dust. More importantly, though, Windows 11 will supposedly wring more performance out of hybrid architectures, like Alder Lake.
We've already seen this to some extent when comparing the performance of a Lakefield-based Core i5-L15G7 in Windows 10 and an early build of Windows 11. The latter gave Intel's hybrid architecture a notable performance boost, in our tests.
Far be it for us to make excuses for one chip maker or the other. But with Alder Lake bringing with it a new Thread Director scheme, we would expect even better numbers on Windows 11, plus whatever gains might be had from updated drivers. There's a very good chance that 2 percent gap in multi-threaded performance gets completely erased, and then some.
We'll have to wait and see if that is the case, though, and how performance actually unfolds when we have a chance to put Alder Lake through the benchmark wringer ourselves. Until then, all these leaked benchmark numbers are basically eye candy—delicious to look at, but not necessarily ready for consumption.