We've seen some cool kicks over the years, from the original Reebok Pump from the late 1980s to self-lacing Nike MAG that Marty McFly famously wore in Back to the Future. But neither of those came with a fully assembled PC inside, let alone one with liquid cooling as a standard option. Cooler Master's upcoming Sneaker X does.
Unveiled at Cooler Master's Chronos Summit 2022 event, the Sneaker X is based on a JMDF mod from a couple of year ago. The original concept was one of the winners of Cooler Master's Case Mod World Series 2020 competition. Here's a recent video of the original version...
That particular PC mod was outfitted with a Core i5-9500F processor, ASUS ROG Strix Z390-I Gaming motherboard, Inno3D GeForce GTX 1060 (3GB) graphics card, 16GB of RAM, 240GB SSD, Cooler Master Elite 600 v4 power supply, and Cooler Master MasterFan MF122R RGB fan. A rather modest setup for sure.
During a recent keynote, Cooler Master confirmed that it has taken that design and will make it available to everyone soon. Called the Sneaker X, you'll be able to preorder it by the third quarter of this year, so no later than September (and as early as July). 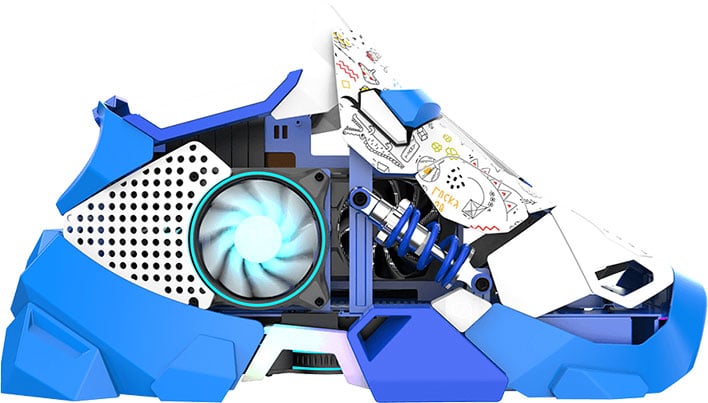 It sounds like buyers will be able to customize the look of the Sneaker X when ordering one, with different color and design options. The custom PC will have a "unique water cooling system" and support the "latest high end graphics cards and other high performance hardware."
Cooler Master acknowledges that the design looks intimidating as far as upgrades go, but says it is implementing a way that will make it relatively easy to swap out parts.
It will be interesting to see what build options are available when the Sneaker X hits the preorder scene, and how much it will cost. In the meantime, you can check out the entire Chronos Summit keynote on Twitch to see what other products Cooler Master has on tap.