Coffee Can Perk Up Semiconductors With A 100X Increase In Current Flow, Researchers Say

A Japanese research group has discovered that a coffee compound can actually increase the efficiency of current flow by up to 100 times. Suddenly, spilling coffee on your keyboard might not be a bad thing for your computer after all.

The National Institute of Advanced Industrial Science and Technology (AIST) announced a recent study that a thin film of caffeic acid on the electrode surface of an organic semiconductor could improve the flow of current by as much as 100 times. The report on AIST says that the caffeic acid causes molecules on the surface of the organic semiconductor to line up, therefore reducing the resistance to current flow.

According to the AIST team, this discovery has huge implications in the sustainability front of electrode modification for organic semiconductor layers. The current industry practice for electrode modification layers is by using thin films of harmful polymers or metal oxides to facilitate current flow. As demand for organic semiconductors and business continues to explode (including OLEDs and organic solar cells), those materials can adversely affect the environment including by seeping into water sources—basically increasing the burden on global sustainability. It goes without saying that the plant-derived caffeic acid can greatly lessen the reliance and negative impact of unsustainable chemical resources. 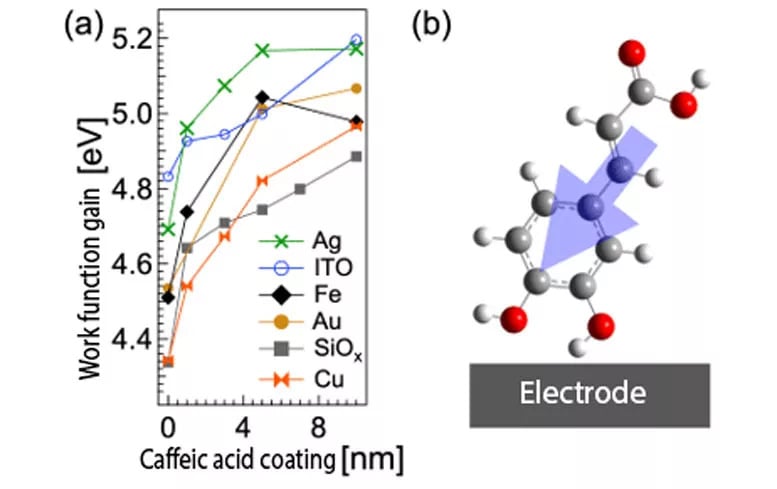 The AIST scientists ran tests of the caffeic acid layer with a variety of electrode materials, such as gold, silver, indium tin oxide (ITO), silicon with native oxide, and iron layer. From the chart, you can see that the electrode work function increased by as much as 0.5 eV after the caffeic acid treatment. The researchers also say that the thin film of caffeic acid does not dissolve in the organic solvents used in the production of organic semiconductor thin films, so it should be an ideal candidate for industrial applications. The team's vision is that this caffeic coating can allow semiconductor and IoT devices to be manufactured entirely through sustainable means.